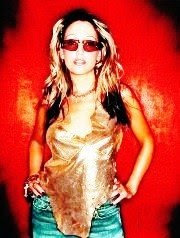 It's not easy being a global superstar: the whole world may well regard her as a battered haggis in a corset (image is everything these days), yet in 2001/2, Kelly Llorenna scored 4 UK top 10s in a row and was then able to score with any Chav she wanted (often also in rows of 4, sometimes 10 depending on the bus stop). Emotions were oozing high as K-Lo begun to wonder if a life shagging any teenage DILF she wanted was all she ever dreamt it would be ever since she was a young and hungry 35 year old tan fan cutting a demo in 1993 called Set Me Free (yes, it was called Set Me Free originally). Almost 9 years later and with such a torid climate clustering her celebrated conjested complexion, the erstwhile N-Trancer had to up her game - her tan level that is. In a life dedicated to pill-popping and looking like a melting mars bar (stage lights can be so cruel, as can daylight), K-Lo took the plunge as she dipped herself in a barrel of batter and bravely went where no Manc slag had been before - head first into a gigantic chip pan of boiling sunflower oil. Emerging browner and crispier than ever before, seaguls (and Danniigoose) swooped down immediately to hack away at her gorgeous new layer of golden batter, but the time was now to finally give the economy what it always wanted - a Kelly Llorenna greatest hits album, beautifully punning her experience of domestic violence growing up in Manchester, All Clubbed Up.

Her finest minutes to date, on Forever her gut-splattering vocals bleed "towards the sky" whilst up to her eyeballs on Es: "the world you see inside my eyes" conveying a retarded romance not even Trisha can compete with. Kelly has the kind of career skidmarks Nikki French would kill for. All Around The World is more than just her misogynist record label (recently the fat and bald N-Trance producer hilariously called her "an old slapper" on the labels official forum), it's also her way of life, innit. My fave raver swears to shave her beaver and give it one more shot: "I will love again" she roars in between downing shots of tequila; 5 minutes later she's face first in her own vomit slurring she's the next Annie Lennox!

I don't know whether to laugh or cry, poor Kelly. I'm spinning Forever and Destiny back to back in her orange honour! God rest her pop career...