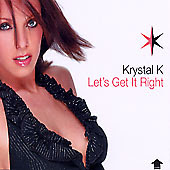 The crystal-meth cool from the lazy, drooling vocals from dance-dalek Krystal K juxtoposes breezey ("progressive") house courtesy of famed-lesbo Dannii disciple Jean Claude Ades and an oozing undertone of insoucience. J.C.A certainly likes his divas relaxed: Dannii obviously turned this one down, presumably supergluing herself to a sunlounger to get out of it, then just sniffing the stuff. The vocalist, under what guise is anyone's guess, had previously supported pork-scratching Robbie Williams, torso-owner Usher and pre-rehab Backstreet Boys, and by the time Let's Get It Right was released back in 2002, the song may as well have been snorted up a triangular Minogue nostril for all the impact it had (denting the allusive top 40 American Billboard dance charts). Nevertheless, her icy and aloof glamour purs a memorably monotone drole that melts into the serene grooves, which are far lighter than the tightly executed Dannii Monogue seapages that would hiss out of speakers in only a matter of months time. The Altitude remix illuminates an arctic sky into a heated trance, yet the husky vocals are an added thrill that even Dannii would have a hard time out-smutting. Buy the single wherever you can find it: you'll get to hear the Vox remix, which trust me is nearly 8 minutes.