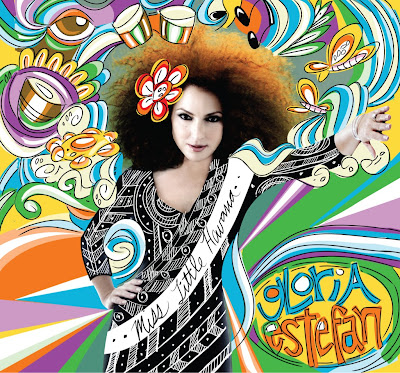 Miss Little Havana is half celebration of the music Gloria Estefan grew up around, half soundtrack to falling in love again with the one you fell in love with in the first place.  Rhythm is everything and everywhere. Gloria's lyrical themes range as broad as the musical traditions she scoops from navigate are varied (Cuba, Miama, Mexico and South America to be exact).

Working in sync with Pharrel, and the match is magnetic, she injects so much fervor and zest that was missing from her last album.  Gloria bumps up against her man in the club on the sweat-drenched sticatto of the title track. Punctuated by precise production flourishes, Gloria gets the game going with a smart and fun lyric. Evolving steadily but expertly, it sets the pulse of the album, is exuberant and yet initially feels mild on the surface - it requires the listener to dig deep into both her rueful considerations and the rewarding texture of Pharrel's ear for detail. It's a groove that finds its power in its control and structure. The crisp, undulating and humid rhythms are enhanced by the noticeably deepened, gritty and fully-committed vocals.  The experience is sharply executed, driven by cocktails, sly dance-floor tactics and flirtatiously conceived moments of eye-brow raising humor.  With the hair and the flair, Gloria's lyrical command, grace and sheer bite is the ultimate ignition.  Once again intoxicating when the rhythm gets her.


Less is much more on the gentle romantic calm of I Can't Believe, which introduces jazzy and mellow piano riffs mixed with some understated Latin lounge aroma, which is formidable in its own right, and rendered so via Gloria's delivery of a gorgeous lyric about catching the same glimpse of another, and herself, all these years later.  This is a truly heartwarming song, and its Cuban inflection helps create an unassuming appearance that only experience could pull off to such a high standard.  A fine pick among the more emphatic contenders for album highlights. Estefan's soothing voice perfectly conveys the strain of being once mudled up in life's obstacles and now finding herself marvelling "isn't life really something?" This moments kills me. The tight rhythm section accompanying the quick step middle-eight is also really something.

The frenzied first single Wepa is a dizzying burst of sizzling attitude. Disrinct, disorientating and highly addictive, it sadly doesn't have a chance in hell of becoming a hit. The song does hit though - it hits you right in the face, if it was more in your face it would give you a rash.  At once startling, the jarring jerks and rabid visceral observations are unexpected and worth getting used to.

Proving it pays to have junk in the trunk, the album keeps peeking in the far reaches of the second half.  The album's zenith, Hotel Nacional is a hilarious standout, and Susan Lucci just won the highest accolade of her career.  Gloria's wry depiction of getting down via flirtatious rhyming is laugh out loud stuff. It's impossible not perk up at such sleek, clubccentric salsa-induced neck-snapping when the alternative is Madonna's unasked-for crotch-thrusting from her own Pharrel-favoured Give It To Me.  Hotel is one of the few songs unassisted by Pharrel, which is a testiment to how much Gloria is giving herself to the record (although the fact that it was recorded in 4 weeks is a little telling in that is has no obvious hit singles).  The point of all the silliness is that you should be moving your body, and you will be.  Whenever the intensity seems to reach a peak, the song retreats and gears up for another charge.

The modest salsa shuffles of Heat, Say Ay, So Good, Right Away and Make Me Say are further consecutive hip-shakers.  Gloria gets to relax a bit and enjoy the contemporary edge that never deviates from her tradition and warm capabilities.  They have much the same flavour, but importantly have connection.  Cutting to the bone, Time Is Ticking is Reach 15 years on. With more than a hint of velvet to her vocals, where her lyrics fall into well-versed ground it is the deluxe emotional depth I'm most grateful for.

Sweeter than the rest, Medicine is a tonic of sleek and sharp electronica that injects into the same vein as the best vintage Peter Rauhofer remixes.  I am overdosing on it.  The stoic momentum builds into a surreal unidentified pathos.  Gloria's husky and thickly-textured timbre gets hot and cold, mischievous, rebellious and caring.  The hot to trot Make My Heart Go implements a usurping blend of na na na na's with emphatic club accents, and feels slightly less authentic than Medicine, but it's equally pleasant nonetheless. Synthesizers galore make their presence known throughout the dancefloor dosages of Medicine, Make My Heart Go and Hotel Nacional.  Most impressively of all, Gloria herself remains the focus: smart, vivid and in her exquisite comfort zone.  Indeed the presence of the few songs, bonus or otherwise, that are not produced by Pharrel only thickens the plot.

Because of its ten year exposure, Gloria's belated recording of Let's Get Loud isn't winning many fans, which might be due to the fact that for many it might sound a little exhausted.  It represents where she left off with Gloria! and therefore feels slightly out of place here.  A signature song for J-Lo (co-written by Estefan, but left off her own album), it wasn't even a hit and yet has became a ubiquitous reference point for Latin cross-over pop.  Estefan herself missed the so-called Latin pop heatwave of 1999, ironically led by J-Lo among others (even Geri Halliwell managed to be ready for it without knowing).  Had it been included on Gloria! these doubts would not be considered, and it would have been a sure-fire signature anthem for her at a time when she really needed it.  However, despite lacking the sheer spontaneity and flamboyant virtuosity it would have delivered back in 1998 it is a very welcome recording to finally own.  Contrived as hell, it's a classic hand-bag anthem.  10 years on, Gloria's going to different clubs where you'd get thrown out for that kind of carry on.


Joyful sounds ablaze on a dynamic return to dance.  This is a richly textured document of an original and important voice in modern music.  Miss Little Havan re-captures the bravura that made her such a potent threat in the first place. More chic than extravagant, why bother trying to be anything less?

ICB kinda is the connector to "gloria!" for me. Very layered and pretty. I do like it. Her last two offerings, "Unwrapped" and "90 Millas" I loved. "Unwrapped" was more focused on drawing on acoustic and other softer, world music influences. And it of course highlighted her penning skills. I like that she can do almost everything, it gives her backlog lots of layers. If you haven't, check out "Destiny" or "Alma Caribena," worth spinning. Good work.-Q