So do your searching until you're down 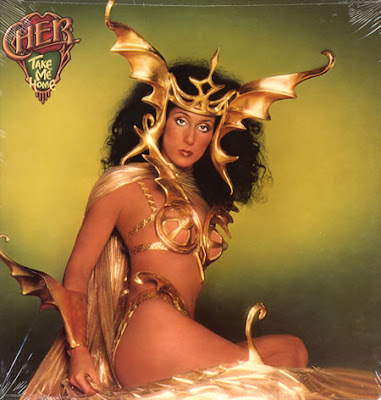 Album #15 from Cher drove her to the disco and jived her back into the charts. Take Me Home was released in early 1979 at the height of disco and peaked at #25 in the USA and was far too decadent to do anything else in any other venue (ie, country). Newly signed to Cassablanca, the label home of Donna Summer (who would later refuse to let Cher have her song Bad Girls when she wasn't keen on releasing it straight away), the album finds the singer in strong form in doing her best to ignite some pretty poor material in among the odd gem, but Cher and disco were a more natural fit than Chaz in size 22 dungarees. After all, what is more inviting than a husky drag queen in sequins asking you to go home with them? It was the first album to feature songs all specifically written for her.

Cher successfully promoted her song and album of the same name on her 1979 TV special Cher ... And Other Fantasies.
The whimsical disco rush of Take Me Home has been an enduring hit for Cher over the years in America, and the song was finally brought to the attention of the UK when Sophie Ellis-Bextor had the audacity to cover it and rile up nana Cher with a few disgusting additional lyrics (the vandalism in question "it's gonna happen anyway" was Cher's biggest upset since Angelica Houston beat her to the role in The Adam's Family. Cher's vocal truly glides, and the song is exhilaration personified. Asking for an argument, Wasn't It Good sips from the same cup, but doesn't quite have the same heat. Elevated by a truly compelling spoken word section: "Whoo! was it, was it really good? Oooh you loved it didn't you love it? Ho-ho god I'm so, grrrrrr, shoot I got it good! Ooh did you love it, did you dig it?" Say The Word doesn't have much to say, and is a bunch of cliches given the generic disco treatment. Happy Was The Day We Met melts into the same arrangements as any other faceless disco track of the era, but at least she bellows a little on the chorus with a few cheery stop-starts to the rhythm.

Blow-job queen anthem Git Down (Guitar Groupie) spits Cher's trademark rock venom and swallows a whole bunch of pseudo rock-raunch sounds. Cher cackling "shady lady from the ghetto" and "what a fuckin' reputation is gonna follow me around all over town?" is her best oral in years (okay, she might not swear, but I know what I'd rather believe in, etc). Such a hardcore performance might have had something to do with then-lover Gene Simmons' involvement. Love & Pain gets at least one of those qualities down to a tee, which I'll leave open to interpretation. Cher gets into it with real gusto and thunderous steel. Let This Be A Lesson To You is more mid-tempo disco jollies, but sounds more like a line-dancing class than Studio 54. It's Too Late To Love Me Now is a gentle country-tinged ballad (she has quite a few of those). Cher's the club singer at the ranch called Bar Nothing. The disco has faded, and Donna Summer wouldn't have lost any sleep over this one. My Song (Too Far Gone) clears the disco floor completely. It's a sad and rare co-write about her divorce from Gregg Allman (an ironic comedown then).

A jubilant commercial comeback, but what Cher has in store with her second round of disco is far more interesting.
Posted by Diva Incarnate at 21:48

Great review! This album sure got a ton of play on my record player in the Spring & Summer of 1979, and there was just so much about it that was just so scandalous... but then again, I was only 12 at the time. Now, 35 years later, it's the three ballads that I love the most... (BTW, her cover of "It's Too Late To Love Me Now" did have a brief run on the "Country Singles" chart in the US, which means that it's the only Cher album that had hits on the US pop, dance, country, and Adult Contemporary charts!

Hi Dann, thanks for the comment. This album has grew on me, and particularly so when it came to light that Too Far was actually very personal and something of a rarity for her.