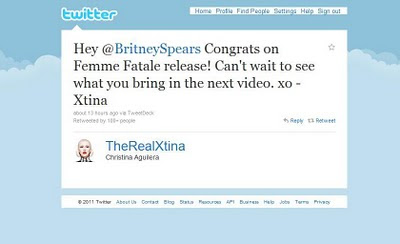 Ever since evergreen beauty Madonna reached out and asked "Hey Britney, you say you wanna become a shadow of your former vacant self, look like a drugged-out hooker doing a walk of shame and bare your soul?" and giggled something about coming over here to show off her gym-ripped vagina, well Christina has been patiently waiting to pluck her pubes and pluck up the courage to make a similar statement that would send shockwaves around Mansion Aguilera if not the world. Literally days ago now, @TheRealXtina blurted out on twitter:

Hey @BritneySpears Congrats on Femme Fatale release! Can't wait to see what you bring in the next video. xo - Xtina

Word is Christina had to make 5 attempts typing her message, but Diva Incarnate has found the original message deemed too 'raw and organic' for twitter. Found on a used sanitary towel in Nicole Richie's trashcan, Aguilera's first attempt at reaching out to the dead-eyed How I Roll singer was less kind than the eventual passive-aggression she settled on:

Hey @BritneySpears - just fell off my thrown Lol-ing at ur attempts to not look like a gangraped tranny in headlights on GMA. Congrats! xo - Xtina

Not one to just sit there drooling onto her bib, at least not too long, Britney was soon spoonfed some calpul and groaned once to give the okay for her people to form a sentence and pretend it was written by the sometimes singer (who also had a song called Sometimes). Only a matter of 60 minutes later Aguilera finally got the global acclaim she had been after and got a responce:

Thanks @TheRealXtina. Can't wait to watch you on your new show. Hope we get to hear that voice on The Voice. -Brit

Kind of cruel to knock a flop singer, flop actress, flop mother, flop lesbian, flop wife and flop tweeter when she's down, but Diva Incarnate also learned of what Britney originally wanted to respond with. This time the words were written using red and yellow crayons, on the back of a prescription thrown out the window of her car as the singer was driven to KFC:

The message was found by an unknown Lohan doing community service, but no alarms were raised as Tom Cruise has repeatedly told police that Katie Holmes pulls the same "prank" 2 or 3 times a week and is a "new game" that slightly out of it-looking LA celebrities like to play in order to stay down to earth and regular.
Posted by Diva Incarnate at 16:26