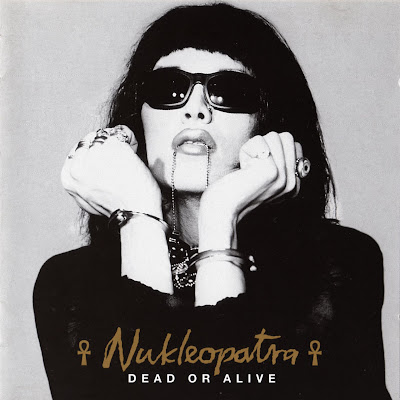 Asphyxiating beats, extravagant deformity, rotten sleaze and a strident taste for scandal and artifice earns Dead Or Alive’s trashy Nukeopatra the right to use style as a social function, with visions of vanity and hardcore eyeliner feeding on a carcass of rave and various other artificial stimulants. The strident and raucous avalanche of rave grenades Nukleopatra is the original Bad Romance if you ask me. Soaked in sleaze, Pete’s torrent of vitriol is engulfing, surrounding fast and fatally. With an apocalyptic thunder of drums that bang sharper than a guillotine, the head-severing impact is only dwarfed by Pete’s own infinite gushing, roaring about looking like the kind of tranny that makes boys crash their motorbikes. It’s not debauched, it’s preposterous.

Not shy about their strange idea of good grubby fun, mutates into the most commercial thing here. Keyboards tinkle like pus, and Pete’s so turned on by his ‘body for sin’ that he would probably use it as lubricant. His sex drive is about as intimate as an inflatable sex doll. The almost inevitable update of You Spin Me Round (Like A Record) is remarkably fresh, Capella would have been a believable producer with the succulent sell of 90s star-bursting. The nostalgic glamour is impossible to provide. Priding himself on sophistication, Pete tickles his boy toy target with the line ‘you hold my dreams inside your jeans’ on International Thing.

Picture This and Rebel Rebel are fully absorbed into the album’s aesthetic like dissolving an aspirin tablet. The former is a sparkly trail of jangly guitars, smudged basslines and Pete’s vocals are splattered like petrol set a light. Neither overwhelms their own material, but are minor triumphs. The closest the album comes to full on melancholia, Unhappy Birthday is a solid stream of rave regrets, a re-make improved by either practice or inattention.

Gutter launch pad I’m A Star pulsates 90s rave impulses and peculiar sentimentality. Another fast one, his glamour-dialect takes no prisoners (‘I’m sorry if that offends you, but that’s how I research my songs’). Sleazy integrity of Sleep With You is comparatively solemn. Simmering with familiar temperatures, The Right Stuff’s simplicity is almost unexpected.

Glossy Gone Too Long receives a thick and sleek coating of speedy eurodisco, with a flowing melody that almost shares the same vein as Lover Come Back To Me. Dub dud Getting It On almost isn’t boring – if this were a concert I think we just got to the costume change. Glitzy bopper Spend The Night favours flashy speeds and is another salacious tell-all tale of bedroom desperation.

The raucaous and strident avalanche of Nukleopatra has long been a vociferous favorite of mine. The rest of the album thrives on similar sounds, but only stings with equal menace, the rest cruise for cock in the club instead. With all the robot energy and waspish asides, it doesn’t matter if the emotions are genuine, only that you get off on them. When the sleaze goes sour, the thin line between glamour and grotesque promotes a tender distribution of vanity-venerating vindications and sweat-drenched pursuits that Pete can only apologise for.

Email ThisBlogThis!Share to TwitterShare to FacebookShare to Pinterest
Labels: Dead Or Alive, Nukleopatra

Loved the "Nude" album, was full of wonderful hits imo!

This was my first DOA album, but I'll go with your recommendation next - based on the title alone...