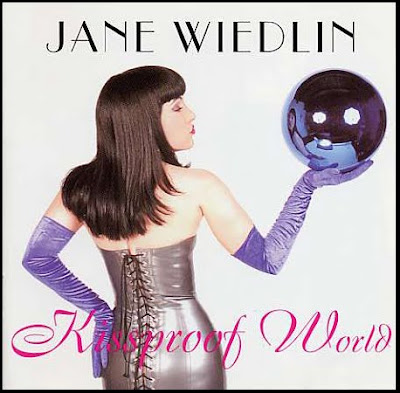 Jangly opener Icicle thaws quickylu into prickly sensations of summer surf-pop scents. And is that the Trio Bulgarka's grand-kids I hear? Softer touch-down Feeling Like Flying permits am electric guitar to slide in between flashy break beats and Jane simply cools things into a mellow tale of caution. Good as it is, I do like my pop fizz a bit more shaken.

I was expecting something like Liz Phair's Fuck & Run for some reason, but the exclamatory Die Now! Pay Later! offers a quick chug nonetheless, soundtracking the everlasting youth of a dozen 90s teen drama titles sequences, and 'as seen on tv...played out...yeah!' fulfills what all good pop songs should exclaim.

Fallen wrestles with a thorny guitar dredge and lazy goth vibes. Title poof of pop Kissproof World is an illuminant shimmer wave, finite and hungry for a reaction: 'baby it's cold out there, people are ugly there' might just have clinched it for me. Pop-dream goes sour on The Good Wife and Jane knocks out yet another minute pop car crash of dystopian pleasure.

Jane's addiction to a killer hook kicks her kook into gear on Sooner Or Later, injecting some anthemic cynicism, emoting and sniping 'something that means nothing'. Jazz-hand piano keys chip away, with the message being sooner or later the facade will crumble, and the sensation from 'I will be your mirror' is onto a winner. Delicious payback My Lovely Revenge has a chorus too fond of the snappy, word-winning and wound-nursisng verses to do any work but bask in shallowness, and I love it. Developed in concern for depletion, Drain might make more sense if Jane turns out to be a really big True Blood fan (my first experience of a pop song about draining a vein).

Minor but tuneful, Messy and Muse repeat their choruses in an endearing evasion of writing songs that are better, but who needs to when the skill of her writing is this gloriously unassuming. Finally we get the truth (not that I don't enjoy Jane's smirking pop dreaminess) - downbeat closer He's Not Talking is exhausted and fuzzy, with extinguishing synth and glistening keyboard vapours.

Sweet and sickly on the outside, prickly and heartfelt on the inside, Kissproof World might not have the commercial grease of her hey day, but her lilting vocal bite is as slick as a sachet of KY. Sooner Or Later is the hands-down keeper, and whilst the pure sensation of Rush Hour has burnt out, her hard driving pays off with the mischevious endevours of such ditties as The Good Wife and the stylistically-divorced He's Not Talking.