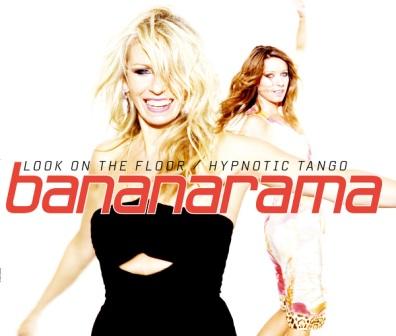 Sometimes when you are bloated you just need to keep squeezing until you get the end result you are after: Bananarama have similar 'back exit' stamina with their ever-enduring brand of breathless Hi-NRG substance abuse. Their baffling gimmick has survived 20 years now without original member Siobhan Fahey, and for many this period is one of 'wilderness' begging the question 'where are those fierce bitches now?' In 2005 they re-surfaced with their most emphatically charged attempt to launch themselves into the lives of gay men of all ages and the girls-with-no-friends who love them. Move In My Direction was rather inept and limp - in the video the girls turned to prostitution in order to generate interest in the still-born first single which was like a blow-up doll, over-inflated and lifeless. From the same album Drama (cos they are down with the Gays innit), Look On The Floor (Hypnotic Tango) has verses vocodered by producers Mute 8 to give them the sought-after septic flair of a 2003 Dannii Minogue B-side. Look To The Floor is given extra lubrication on the Solasso remix - it's a blistering tribute to every amazing remix from the summer of 1997. Their vocals are warm and foggy - the orchestral trance is mezmerizing and the sinewy bassline properly dives into dancefloor Dannii-esque sleaze. 'I can't slow down' is their poker-face responce to anyone who dares criticize their dancefloor blow-job technique - these girls take a chance wherever they can get it, and on this track I can't ever imagine leaving the dancefloor again no matter what these MILFs do to me in the process.

Look On The Floor (Hypnotic Tango) - Slasso Remix
Posted by Diva Incarnate at 22:36