Mariah's drag impersonation of Eminem clearly wants 'the white one with the skin condition' to bite back and get her some easy press for her bitchin' new single Obsessed. No doubt she will shrug blankly at how 'insanely hilarious' her new video is whilst being interviewed from her bathtub, but as I was expecting comedy Mariah to actually be insanely hilarious, apart from a few shopping scenes the overall effect is rather sedate. And she looks like David Gest, not bloody Eminem: 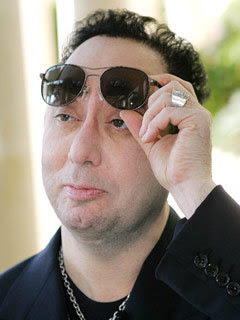 The song itself is another typsy club song with Mariah's sassy vocals gnarling seductively - there is no stumbling to the bar this time (as in her 'first round' banger Migrate), but the pervasive vocoder actually helps convey her judgement affected by something other than diet avion. I give the song a (Hepetitis) C and the video a C also.
Posted by Diva Incarnate at 21:14

I'd call "Obsessed" not a follower of the "Migrate". But I wouldn't even call "Migrate" a first in its line either, that'd go to "It's Like That" from the Emancipation of Mimi.