My Soul Is Unbelieving 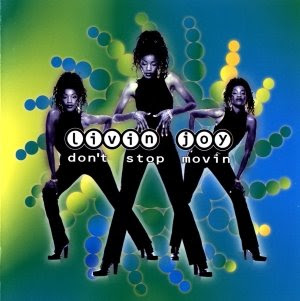 Above: the acid-house imagery proudly fronted by Livin' Joy's second vocalist Tameka Star who declares war on fat people with no motivation throughout the album's 11 tracks.

Throbbing 90s house music did not pound harder than the triple-penetrating beats of Livin' Joy, with their razor sharp, chic and sleek singles that littered the European charts between 1995 and 1997. The legendary act was also catapulted across the Atlantic with moderate, lengthy chart damaging singles Dreamer (UK #1 and 7 weeks in the top 40) and Don't Stop Moving (UK #5 and 12 weeks in the top 40), but scavenged a further 3 UK top 20 hits, as it was in Europe where they left their most impressive skidmarks. As a 4-hit-wonder dance act, they join the Real McCoy, Corona and La Bouche, as towering leaders in their game of 'vagina and a disco beat' shananigins, in the elite few who went as far as releasing a whole album to remember them by.

Above: Robinson's ultra-fierce performance in the Dreamer video could make even Grace Jones wet herself - here, the American singer gets some beauty sleep before an early dentist appointment in the morning.

The wanton whiplash Hi-NRG of Dreamer features the collosal vocals of Janice Robinson, an earthy singer whose smouldering sexuality was the type of uber-fierce femininity drag queens dream of. Her rapturous, lover-dissing lyrics hissed famously a change in fortune, the tireless rapid fire of 'here we lie all alone am I dreaming / your heart's smooth my soul is unbelieving', using her vocals as a formidable weapon, which has never been matched and at once created a unique proposition of which would become Livin' Joy's trademark style and pace. Italian producers, and brothers, Venturi and Viani Visnadi oversaw acts including Alex Party (Don't Give Me Your life), Simply Red and 2 Unlimited remixes, and even another bald black dance diva Alison Limerick (the ambient Put Your Faith In Me and accompanying remixes).

Above: Tameka's ferocious anti-impotence campaign was so scary that her no-nonsense 'keep it up' refrain from Don't Stop Movin' has resulted in the world's population growth epidemic.

When Robinson abruptly balted after the mammoth success of Dreamer, Tamek Star was her divisive replacement. Whilst Star's delightfully out of control slit-throat vocals were unable to topple her predecessors, her qualifications as a writer were very much evident on Don't Stop Moving, a gasping '110%' workout mission that almost equals Dreamer for sheer adrenaline and militancy. She starts to drain on the rest of the album where her 'get off your ass and achieve bitches' shtick is a bit like being face fucked by a life coach shoutting as she comes across like the Hitler of dance.

Above: Despite overcompensating with aerobic cliches, Tameka Star was simply outshone by, and could not compete with, Janice Roninson's natural instinct for transsexual prostitute glamour, broken down into wigs, pvc, feathers and ripped torsos belonging to rent boys unseen in this video breakdown of Dreamer.

However, Star does deserve credit for her ridiculous abs and contrived 'mmm hmm, girlfriend' neck-snapping - she practically gives herself a high five on the slightly dark Be Original album cut, whilst those beats keep slicing away ferociously. Highlights include the dead-eyed single Where Can I Find Love (UK #12), which would be funny had she sung 'am i looking for love in all the wrong websites?' instead of 'places', but the straights do love their dogging. Fans left drooling for Robinson can take consilation from two of her early solo singles, both produced by the Visnadi bros, the Morroder-esque Children and a certain Sweetest Day of May.


Above: Robinson's first solo video presents her heavenly voice with a budget that probably stretched only far enough for a razor to shave her head in order to maximise record sales with a bald black female dance singer - the track itself triggers an agony only dance can remedy.

Going steady, Follow The Rules really does feel like a self-help lecture, spearing its way to number 9 in the UK, but gnaws away at my ears (the fact that Star is credited with producing her own vocals is rather telling, her style is often far too histrionic, as if she thinks she is better than a mere makeshift dance singer). Rumours fly around forums like spare cocks in a gangbang, that Star and her producers fell out. After the album campaign was laid to rest, a sophomore effort was indeed recorded and an Australian-only single Just For The Sex of It was a very 1998/9 Euro-pop affair that would certainly have been a minor UK hit had it been released, and not being miles off from another hit single at the time called Sex On The Beach or even the Tamperer featuring Maya. Their familiar rampant Italo-disco sound was more reinforced rather than reinvented elsewhere: the galloping Love Yourself is another soap-box anthem but has an impressive momentum that just builds and builds as piano keys are splattered like flies on a registration plate.

Below: Comeback single Just For The Sex of It was a bit of a limp black dick, it slapped you around a bit but never brought a 'joyful' tear to your eye, with no full facial in sight. Australian gays soaked up its trashy brilliance and made it a top 100 smash.

Ready For The love is formulaic and desperately revives the pulse of Dreamer, which feels like an old lover pounding away at you just for the sake of it, I mean just for the sex of it (yawn). The funky, heavy bass of I Only Wanna Dance almost wants to be Basement Jaxx but sounds work in progress and out of date even for 1999. Lookin' Fine is another run-of-the-mill Z-snapper, this time yanking inspiration from Don't Stop Moving. Tameka finally does her trembling voice justice on U R My Livin' Joy, which is like a lost Dina Carrol disco flirtation - stripped of their asphixiating beats, cooing vocals fawn over a sleeping muscled black basketball player, not even giving a moments thought to steal from his wallet (true love, y'all). Overall these unreleased songs invariably sound in hurried competition, only Love Yourself proves worthwhile in these high stakes, but develping their sound might have been worth finding more time for as proven by U R's contentful seduction.
Posted by Diva Incarnate at 18:14

Livin' Joy were amazing! I think I have all there trashy CD singles in a box somewhere. I totally forgot the tragifabulous "Just For The Sex Of It", which really is as bad as the title suggests.