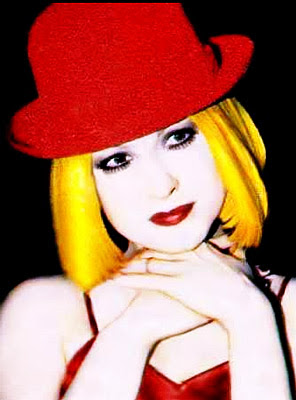 If ever given the unlikely challenge to compile a 1-disc compilation album for Cyndi Lauper, this would be my playlist (note the subtle difference between selecting one's favourites as opposed to a credible and realistic, albeit hypothetical, best of track sequencing):

02. Girls Just Want To Have Fun

05. All Through The Night

Songs I love, that are huge favourites, but don't fit the task of giving Cyndi her immaculate collection, ie, best of CD that would best give her another shot at glowing reviews and a decent chart run:
(Blue Angel tracks) Magazine Cover (glorious vocal showcase that only a singer of Cyndi's ilk could really dig deep into such a gigantic task to bring such a dreamy vocal run); I Had A Love (classic girl-group heartache); Lorraine (Cyn's signiture blubbery vulnerability is adorably crushing as ever), Anna Blue (her emotionally tormented wailing at the end is particularly lingering, liberating and haunting - it's almost impossible to listen to if you're already feeling a little blue yourself, or perhaps this is my memories of being 15 and experiencing the full-thrust of my lonely teenage angst); When U Were Mine (fizzy Prince cover, although Cristina Monet arguably has more fun with the gender-bending possibilities of a woman covering a male song, but Cyndi recorded the definative version in my opinion); twinkly True Colours era B-side Heading For The Moon (nicely arranged and a bittersweet vocal that's delivered like icing, and a huge emotional pull during the chorus); 3rd album false start Hole In My Heart (All The Way To Chine) went all the way to #54 in the Billboard Hot 100, but did at least go top 10 in Australia (a really manic vocal explosion that took a step backwards from True Colours, but was more 'Goonies' than 'Fun', although it certainly was fun - the decision to pretend it never happened kind of signalled the end in retrospect); criminally overlooked as the logical follow-up to her last big international hit single I Drove All Night, Unconditional Love attracted the attention of Susanah Hoffs who wanted to have it for The Bangles and was told by it's songwriter, Billy Steinberg, that he would write something better for her group (that song would be Eternal Flame), and Hoffs would later record an interesting version in the 90s, but Cyndi and/or her record label really passed on an incredible opportunity here, it has an 80s-ballad feminine treacle radio would not have been able to refuse, and it's not as if that album was an easy sell, so it's just mind-blowing that this ultimately remains a fan favourite when it could have been a genuine hit for her, of which there are sadly not many; smoky and mature, Cold Sky (if only Cyndi could have wrote more songs like this for A Night To Remember - it's a far cry from the contrived idiosyncracities of songs such as Dancing With A Stranger and Like A Cat); A Part Hate (a gorgeous orgasmic ripple of redemption, grimacing at bad memories - this was the issue with Hat Full of Stars, it was weighed down by autobiographical lyrics that were sometimes a bit literal and uncomforatable, but it was a brave and bold era for Lauper overall, and an important album to really hear her 'voice', etc); Sally's Pigeons (how could I have scraped this one off? It's got a milky vocal from Lauper, and it's got a pensive brilliance to it - it's very absorbing, but my playlist is to showcase Lauper more as an emphatic pop star whose moments of contemporary brilliance after her debut are rarely given props, and the singer has better pop ballads in her cannon); Dear John (an early indication of Cyn's snarly distate, which is also evident on the vitriolic, if a little scrappy (which might have been on purpose - Lauper did after all put producer Mark Saunders off working with her ever again for life) Love To Hate from Sisters of Avalon); the ska-narrational and sexually-irrational Brimstone & Fire was throwaway and, finally, Lauper in the 90s sounded carefree and careless about just enjoying her gifts without having to analyze and concentrate too much about it; the roots of Say A Prayer might be found in her spoken-word remix of the is-what-it-is single Come On Home, but we have her trademark organs, and the song is a jazz-infused gem; the very TLC-sounding This Kind of Love is sensual and Cyn's beestung vocal gives T-Boz a run for her money; sister of night, At Last was the moonlit after-hours torch ballad that really saved this project for me, intimate and completely seductive; Eventually boasted a decadent bridge that hands-down beats the actual chorus; the guey dance jibes of Echo shoots itself out like a rainbow, with Livin' Joy esque rhythms during the almost jittery verses; Got Candy (Roxy Music meets Aqua? That sounds cruel, but I actually mean it as a huge compliment, perhaps Cyndi felt it was too bubblegum and plucky, but I would have yanked Lyfe out of Bring Ya To The Brink and slotted this in track 5 instead; and finally, Still With Me, a live favourite Cyn has been teasing her fans with for years.

I just know I will have left lots of songs out, so would love to hear your thoughts!
Posted by Diva Incarnate at 15:50

1.The World Is Stone
2.Unconditional Love
3.I'm Gonna Be Strong
4.Maybe He'll know
5.Sallys Pigeons
6.Hat Full of Stars
7.I Don't Want To Be Your Friend
8.Christmas Duel (with The Hives)
9.Feels Like Christmas
10.All Through The Night

Oh man. There are so many songs I just enjoy from her, so I'm going to list some that immediately come to mind:

"Calm Inside the Storm" (love this one)
"Shine"
"Into the Nightlife"
"Heading West"
"Cold"
"Someone Like Me" (my anthem"
"Fearless"
"Stay"
"Witness"
"Come On Home"
"The World Is Stone"
"I Drove All Night"
"Hole In My Heart..."
"Feels Like Christmas"
"Echo"
"Above the Clouds"
"Rocking Chair"
"All Through the Night"
"Maybe He'll Know"
"The Ballad of Cleo & Joe" (!!!)
"The Farawar Nearby" (co-written with former 'Til Tuesday frontwoman, later indie legend Aimee Mann)
"She Bop"
"Change of Heart"
"Sally's Pigeons"

I love talking about Cyndi. I didn't buy her blues album, but will be asking for the DVD for Christmas. I do struggle to choose my all-time favourite Cyndi song, but she has a very impressive, and varied (however contrived the chapters have been), catalogue that's not in the public conscience and therefore not as "iconic" as Madonna's. However, most of her contemporaries are in the same boat, so maybe her career "nose dive" isn't as bleak as it can feel - her sheer talent has always shone bright enough to qualify her place as something of a pop pioneer. Sometimes I like loving songs hardly anyone knows about - music needs to be hunted down sometimes.

But I always like knowing the "lesser known" stuff because by default it has more mystery. Not to shade the popular stuff, which sometimes can match the hype. It just depends. I do agree some of her chapters are a bit much. You raised an interesting point in your SoA review about HFoS, which I regard as her masterwork, next to BYttB. I didn't agree, but thought you expressed it well about her self-narrative being a bog down.

Personally, I felt it was cheap for her to reach for the "songwriter market," as she always been one, even if people didn't acknolwedge it. So stuff like "Say a Prayer" and "Love to Hate" just sounded silly to me. That said, that album has some cool cuts on there.