Nomi Madness might not yet be a household name, rehab posterbitch or widespread web hot topic, but Hollywood's latest he-she electronica star is an ambitious new name to look out for. Giving me and you a taster from a forthcoming album, the newly unleashed EP Fairytales is a quick fix of glistening dance music, and available on iTunes. 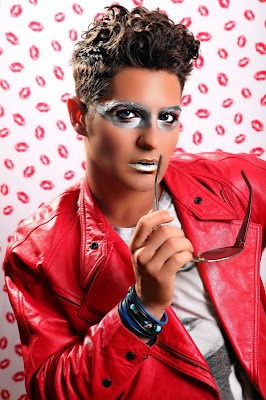 A million ear orgasms in one, Red Wine Girl (David Kahne Mix) is a super-slick, swoon-inducing cocktail of glossy swirls, and airy oohs and ahhhs. The Rush (Clubbed Mix) is a taut house jam with even stickier bassline. Originally a Gina G song intended for her second (never-released) album, Tease Me (Part 2) gives the former breathe-heavy Rn'B number a decadent dance make-over. The juicy, shiny pop of Eye Candy (Virgin Version) is indeed very Like A Virgin era Madonna with its glittery aroma and faint tinges of melancholia underneath the sparkling upbeat tempo. Despite the marketing towards 'the hipster crowd', as it says in his press release, he is normal enough to not forget about writing sizeably good pop hooks to back it up -his brassy androgyny and soulful emotionalism won't settle for anything less. Whether his seizure of the Gaga/Glambert explosion is calculated is neither here nor there - there is no discounting the lush oohs and ahhs of Red Wine Girl for starters - but it shall be interesting to see if the eyeshadow shall overshadow the obvious potential here for some great pop songs. Let's hope not.
The melting guitar ballad Welcome The Teardrops is not available on this EP, but with any luck it will be included on a future album. The song was originally recorded by Diva favourite Dannii Minogue for the purposes of her shelved follow-up album to 2003's moderately well-recieved classic Neon Nights, and has remained unreleased until now. What is most interesting is that Nomi actually sings this song in a very Dannii way on the expressively furlon verses. However, there is no doubt that this talented singer makes the song 'his own' - the chorus is a classic, and has 'hit single' stamped all over it. Poor Dannii, yet again losing out on such a gem of a song. This is one of my favourite recordings I have heard all year, and I'll most certainly be including it in my best tracks of 2011 countdown. Co-written by someone called Billy Steinberg - I'm sure the guy will get his big break someday. Who knows - perhaps Nomi will wisen up and stick it on his album? Speaking of All Around The World (Dannii's former record label).... Nomi has travelled across to globe to record his work: Melbourne, Australia, Brooklyn, Manhattan and Los Angeles. Either the guy gets bored staying in the one place for long (usually I'd make a joke about the person obviously being a tramp, but I don't know the guy yet), or just works really hard. If you met Nomi at a bus stop he'd probably start going on about his 80s influences such as Bette Midler, Boy George, George Michael, Prince and Madonna.

Unafraid of inevitable comparisons, Nomi Madness literally wears his influences on his bedazzled sleaves (see his homage to Micheal Jackson above, not to mention the name itself). The lucky bastard has worked, directly or otherwise, with some of the world's biggest 90s dance divas of all time, not to mention James Wirrick (You Make Me Feel Mighty Real - another Dannii Minogue classic, that was actually recorded first by a feminine black man called Sylvester) and Duane Morrison (Don't Call Me Baby performed by Madison Avenue). I'm a fan, I'm following him on twitter, and so should you. Adam Lambert watch out, there's a new girl in town and her name is Nomi Madness.
Posted by Diva Incarnate at 23:16

Nice review - I admire your style of writing. I see where you get your descriptions from, in terms of that youtube clip, but I think he needs to settle his vocal style down as Teardrops is very akward until the verses start - i thought he was a woman at first when I read the dannii post. I don't have a blogspot account but I also left a kate ryan comment. Thanx - this site is great!

Thanks for the feedback. Well it was written for a woman to sing, but I think androgyny is almost intentional here at least in terms of the whole package.