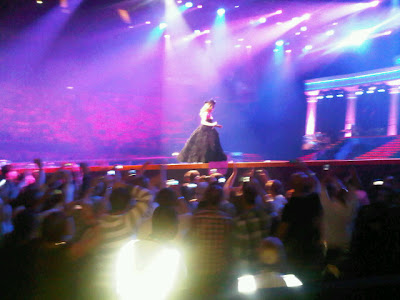 In news that won't shock anyone with a discerning ear for a good pop song that isn't sung by a 40 year old impersonating a child prostitute, Kylie Minogue's Aphrodite tour isn't exactly bringing the house down. With more red patches than Michelle McManus in a bathing costume, we can see the rows of empty seats at a recent date attended by none other than the UK's favourite party jammer Dannii Minogue. We all know that BraveKylie has battled a series of flops: her X album, her Aphrodite album; her ridiculous right eyebrow; her empty womb - and now her new tour. Not one to kick a flop disco cougar when she's down under, Dannii has sent out an emergency tweet to all her fans, begging the world to put finding a cure for AIDS on hold (La Toya Jackson will be raging when she finds out!) in order to support her much older sister try and convince the world that she's still got it (crabs that is). Kylie's concerts have got so desperate in their attempts to seduce the gays with naked gay dancers that her next tour is expected to be a live gay sex show with her singing her anti-rape jams Never Too Late To Change Your Mind and Got To Be Certain. Outside in the carpark.
Posted by Diva Incarnate at 21:36

LMAO @ this! I can't bear Kylie with her surgery, but love her dance songs and Aphrodite was my favourite album of 2010!

Yes! I feel the same way, except I think Aphrodite was stagnant apart from the lovely-if-bland lead single.

Please, I've had cancer too so fuck off.