Thick-voiced Hi-NRG siren Samantha Gilles gets going on just about every track on her 1996 disco package Destiny, narrowly topping Gloria Estefan to the crown for the Best Album Called Destiny award of 1996. Hardcore italo-house beats swing left right and centre, with more meat than an NBA locker room, and thankfully SG is more than ccommitted to dealing with the crippling rave exotica, which is a tremendous up given that this frantic set of happy-slappers bounce off the ceiling with an almighty flush of flashy adrenaline. 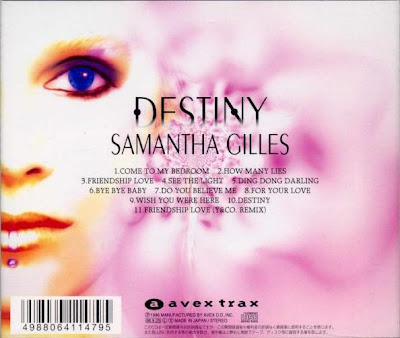 As far as dancefloor demands go, the rampant and randy Come To My Bedroom is diva grandeur incarnate, a hard and fast Hi-NRG gauntlet that I don’t see many guys getting past. Going full speed, she uses the classic line about ‘the bed is so soft’, with ‘special surprise’ (girlfriend, how big is it?) to show to her special man, whom she gushes ‘is just the right size’. The dark menace of it all could frighten bats out of their cave, but the flashy sheen enabling the vast rapidity is just as asphyxiating with a sizeable rush of stimulation.

Above: Samantha's mystery lover races over to her soft play pen.

Barmy-but-thrilling disco frenzy How Many Lies keeps things composed with wrist-slashing beats, guitar growling, glitzy synths, thundery thuds, and jittery ping-ball speed sounds that are flashier than Dannii flashing her pits at the local lesbian bar. Sam’s inflamed incredulity thankfully can't quite quash her capacity for raw ecstasy, which many listeners might need to be on to experience her full benefits.

‘Feminine friendship love’ is apparently what ‘you boy’ have been waiting for. Clearly this fag hag doesn’t get why those boys in her audience are dancing with each other. And wearing spandex. ‘Feminine friendship‘ sounds like a brand of tampons. Friendship Love, the track, sounds like a tranny having a stroke in full slap. ‘You are a he-she, that is okay with me’ might be the penny dropping after all.

Theatrical settings illuminate See The Light , an appealing appeal for her man to see her as more than just ‘a sex machine’. Her beaming vocals are hard to argue with, and the moment she repeats her chorus second time around it’s hard not to be converted to her simple-minded charms. With its constant pulse of pounding NRG, a soothing hook relieves the otherwise scary Sinitta-like fashion of riper than ripe pop nutrition – the brute force of the beats almost makes me feel like a rape victim.

Just as epic, the exhilarating Do You Believe Me is a murky swamp of sleaze and dark rave ridges juxtaposed with rippling jubilation: choice lyric ‘guaranteed to give it up’ is destiny fulfilled. The title track threatens breathing space with plaintive piano keys treacling down before her Hi-NRG nerves get the better of her with a flustered hail-storm of strident disco mayhem.

Uber embarrassing Ding Dong Darling is a startling bubblegum stir-fry of simmering synth sounds whisked up into something that would have gave Scooch the skids. The simplest of melodies to discern, a bit of a classic in the genre for ravers who watch a lot of early morning kids TV, but I’ll pass. Bye Bye Baby’s gulping-disco thuds are only less rinse-able than its panting and passive chorus. Sadly I haven’t been able to hear the rest of this skidmark of hardcore 90s Hi-NRG Italo-house dance music, but the high speeds of my highlights have set an impressive standard that I’m truly in awe of.

With bulging beats so invasive they could give you a yeast infection, the surprisingly glossy opus Destiny is such a joyous release. With its intensely claustrophobic dancefloor determination being hard to take in one sitting; it improves immensely with repeated poundings, not least due to Sam’s sturdy vocal stamina in full control of the disco Bunsen burner ferocity. She scores high on the explosive and darkly deranged gush-fest Come To My Bedroom, the transgender-friendly Friendship Love, giving her man the snip on the How Many Lies, the Sinitta-esque See The Light, and the exhaustive euphoria of Do You Believe Me. The beats are LOUD and don’t take ‘no’ for an answer, so be prepared to have your ears and dignity ravaged.