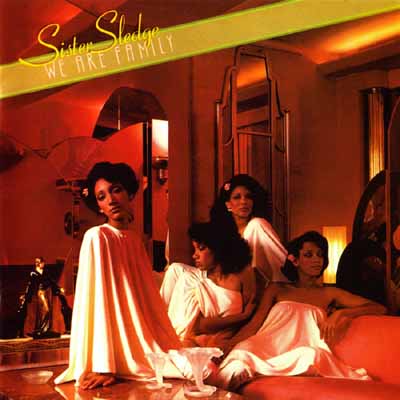 With their blue-sky harmonies and innate chemistry, Sister Sledge slayed the 70s disco scene thanks to genre-auteurs Nile Rogers and Bernard Edwards (a.k.a Chic). Their career high, the seminal We Are Family album, contains all their signiture hits and equally lush and delightful album tracks. The riffs, melodies and guiding strings that breeze through the steady flow of decandence on He's The Greatest Dancer, neck-snapping anthem We Are Family, the flowing utopia of Thinking of You and the edgier execution of the rapturous Lost In Music are instantly recogniseable and are better than most of the songs Chic kept for themselves. The electric sensations of Lost In Music are matched by lyrics that describe the song for you: "melody is good to me" belts Kathy Sledge, and it is impossible to disagree. Flashes like this are intoxicating and pervasive. Elsewhere, One More Time is sleek and slinky (it's verses are peppered with perky lines such as "I know you know that I know it's true"), Easier To Love polite and earnest, the expressive You're A Friend To Me is indicative of the material found on their next album (also helmed by Chic - less riff driven and reliant on the lush feel-good fuel of their luxurious harmonies), and Somebody Loves Me is equally as shy, sentimental and underrated as Diana Ross's Friend To Friend. Critically and commercially, the Sledge would never better this album. It remains one of the most cohesive and addictively pleasing albums of the 70s. The monstrous 1984 UK single of Lost In Music is worth a shot, as are the flashy 90s house remixes often overlooked (their brilliance comes from their loyalty to the originals).
Rating:
9/10
Posted by Diva Incarnate at 18:01

Email ThisBlogThis!Share to TwitterShare to FacebookShare to Pinterest
Labels: Sister Sledge, We Are Family