Siouxsie Sioux's growling purr and abundant snarling on The Creatures' epic flamenco standstill Standing There lyrically stampedes over wolf-whistling jocks, hissing considerately 'mmmm you got a problem - we know, but there is something you oughta know' in composed, angry kindness before pulling the trigger. Beginning with the knuckle-scraping clastanets, it attracts like fluttering eyelashes assuming the guise of a willing object for the grunting gaze of gormless and gruesome sex-retarded greboes, before purposefully sending them on their way in particularly glamorous fury and teeth-cracking clatter.

Below: the striking cover for the 1990 album Boomerang was shot by Anton Corbin, the longtime collaborator with Depeche Mode. But this is Siouxise just being kind: a moment later her throaty charge has started. Fuck Lady Gaga's grunting on the boredgame LoveGame, this is real confrontation designed to unsettle - none of this MTV dance crew crap that's feeding the masses with so much promise on the label and yet nothing substantial content-wise. Her gurning vocal charge is adeptly matched with the avalanche of Budgie's entraining percussion and drums. 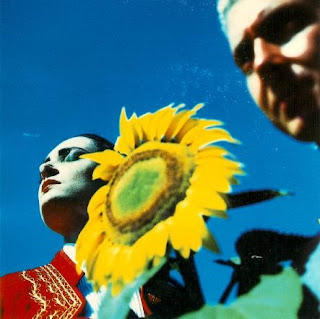 Siouxsie continues to flare her nostrils all through this purging anthem: 'how empty and pointless you life - HEY! - must seem' is at the tame end of the scale. As a 15 year old I needed this kind of battle charge just to get through the day. Best of all:

Does what you won't understand scare and make you mad?
Resentful and envious, don't you disgust yourself?
So funny to see how pathetic some men can be
Many suppressed eye-rolls were compensated for by hearing the rapid flow of these knife-slashing lyrics whilst still at secondary school. Her aggrevated caution and fearless combat descend with vitriolic disgust into open fire. Chances are blown and 'somebody should show them where to go' packs the final punch.

The final single from the album was the less scorched Fury Eyes, a tropical thirst similar to another of their songs Ghecko, and nodded towards the lavish decoration of the next Banshees album Superstition. It sounds like a song of the affection shared between mermaid Ariel and crab Sebastian from Disney's the Little Mermaid, with typical joyful bite from Sioux. Splendid stuff, and remixed vibrantly for its perky release as a prediictably non-charting single.

Below: 'If I see one more erection before breakfast I won't apologise for applying yet more lipstick' (still taken from the Standing There video). 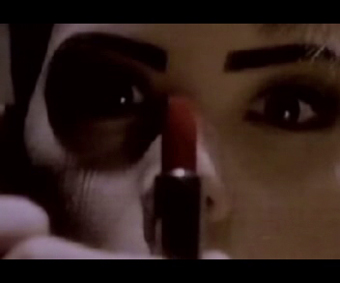 Elewhere, the jazzy Killing Time was covered by man-babe Jeff Buckley, the burping Willow dares both Siouxsie and Budgie to keep going in spite of a missing melody, and the plummeting Pluto was performed on UK national TV. The beauty of Siouxsie's glistening vocals are evident and reflected from all angles on Boomerang, a peaceful and sometimes spitefully gargling deviation from their main work it is no less vital.

Email ThisBlogThis!Share to TwitterShare to FacebookShare to Pinterest
Labels: Siouxsie Sioux, The Creatures