Cher's theatrical whore-ballads were to the 70s what AIDS was to the 80s - i.e, everywhere. Try as she did, the public were simply immune to her infectious invasion of additional haunting folksy torch ballads. The short period between 1975-6 was Cher's most imaginative and rewarding personification of her foreign bissexual sensuality, yet was lean on actual hits. Her deadpan androgyny gave her ravaging vocals a ploughing depth that unearthed introspectively creative crevices that have not lost their vital nutrients some 30 years later despite subsequent neglect and obscurity.

Above: 1975 Playboy magazine photoshoot (a cowgirl's work is never done, etc).
Having sung backing vocals on Darlene Love's torrential Christmas ballad Christmas (Baby Please Come Home) (being told to stand 2 steps behind the other singers), and recorded Ringo I Love You under the pseudonym Bonnie Jo Mason, Cher's first and only names-sake collaboration with ladies favourite Phil Spector some 10 years later was a long time coming. The fact that Sonny worked in this man's studio, and that Sonny & Cher's early material positively aches to reproduce his bombastic 'wall-of-sound' signiture, makes it all the more appealing that Cher should ignite her vintage 70s vocals onto Spector's slow-burning candle A Woman's Story.

However, whilst the 60s Spector chemicals clearly remain, these productions put their talents into a languid brewing stew, and the results are dense and hotter than a Turkish baths. With her reputation up in smoke Cher blows caution to the wind, her opening line mourns 'there are many who have laid with me, then gut up and walked away from me'. A job well done is a job worth doing I suppose. Armies have marched over this woman, a woman who has seen things that would make good little white American soldier boys from the 1970s wet their pants in both moral horror and high-five arousal.

Above: Cher takes extra care with a fag.
The seething and cutaneously operatic backing vocals blister with burning inferno whilst Cher flatly grimaces 'hell no'. Wrenching further, 'a woman who was passed around' (with the salt I would imagine) is howled with a vocal simultaneously deliciously rotten and convulsively plaintive in equal reaction. However, when the song gives direct testimony to finding true love, Cher sings with the tide of skin-crawling tension savagely against her and the britstling track remorselessly fades out as it drags her back down into the drenching flames.

The raining ballad treatment of The Ronette's Baby, I Love You is crestfallen and dewy, oozing into hibernating meditation. Cher draws out a new-found tenderness to the lyric: usually full of so much joy, it is hard to wonder if Cher is laughing into her double chins with this one or else shuddering her face that is raddled with rage and tears. Whether an emotional robot or hysterical masochist, you are going to feel restored with this one. 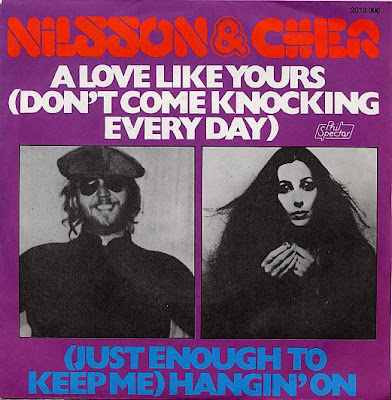 Above: Nilssonny & Cher strike back!
The song A Love Like Ours is as famous as a knickers-free Britney leg-spread, recorded by Dusty Springfield amongst others, and Cher duets with Harry Nilsson on an affable version locking eyes with each other like Madonna sizing up 3rd world orphanages. Cher is not afraid to make sure lil' Nil does not get a look in, over-yelping and slightly out of key as she belts 'knock, knock, knocking every day'. It is actually very compelling to hear Cher sharpen her voice back to her vintage 60s sandpaper style, but this is nowhere near as incisive as the other two cuts. 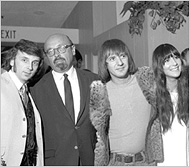 Sadly these lingering recordings incredulously remain unreleased (for my standards anyway). Her record company deemed them too old fashioned to rekindle Cher's diminishing public appeal at the time. Spector discreetly disinterred Cher's nightclub singer past whilst presenting an unseen smouldering allure unafraid of revealing gruesome details that would make even sailors in a brothel blush. However, they pack more heat than all of her oil-gargling cougar schlock-rock from the mid-80s to early 90s and deserve to qualify Cher as the uniquely graceful and occaisionally thunderously disgraceful performer she truly is.

Shame on you, the comparison between Cher torch songs and AIDs.

That was in bad taste.

Bitch, you need help. Obnoxious and in bad taste. And some of your 'facts' are way off. I imagine this is what jealousy looks like in print.
SAD

I love this song! You're probably right that it was in bad taste - it was ages ago though.