Transexual dance terrorist Dana International may well sing as if she is gagging on one or two of her famous rent boy back-up dancers, but is perfectly capable of taking the simple genre of tranny-pop to heights unseen since Tyra Banks measured her forehead against a double-decker bus. File this one under 'magnificent' as her breathtaking 2007 opus Hakol Ze Letova was a sedate avalanche of arctic rave ballads, hectic hebrew whore anthems, cock-hungry seizures and stoic Hi-NRG palpatations. Her hauntingly strained bee-stung vocals are sung with more appetite than a swarm of locusts and yet usurp her beguiling genital-reassignment pathos and transcend the language barrier with tenderly orchestrated consideration.

The Eurovision winner's emotional insignia is earned through the oracular arctic dance balladry of her exquisitely stark title track alone, which melts into a flood of yearning desolate melancholy. Mournful and vividly determined, damned Dana fights to deliever her finest attempt at singing yet. As she grapples under the usurping misty synths, it was her strongest single since Lola, which is included here as a bonus video. Translating as 'it is all for the best', it is a song of tormented regret if ever there was one.

The gentle nudging of Yom Hule is an equally discreet dancefloor suicide note: who knew she was the new transgender Nick Cave? Her bittersweet narratives creep through the language barrier and haunt you with their lingering 5 o'clock shadows.

The frog-leaping instrumentation of Bereshit is an eccentric nod towards her rampant eurotrash past, and it is hard not to smile when a melody German beer-drinkers might chant is being led by an anorexic tranny who makes Pete Burns look low maintenance. 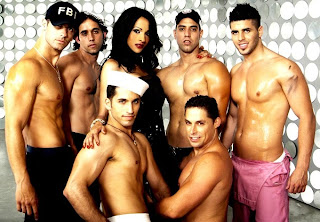 Above: the last-minute video shot for Love Boy meant over-cocky Dana was left toiling to recruit rentboys who weren't busy.
The exhuberant and skittery flamenco flutter Lo Ma'amina is a pining adventure: Dana sounds fearful and anxious as she awaits an invitation to one of Dannii's famous lesbian sling parties. 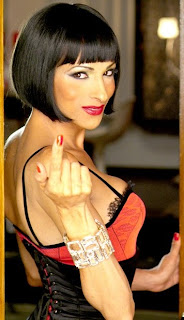 Above: Dana forgivingly gives Dannii the finger for copying her lego-style lesbo bob.
When the dust settles onto the yodelling Yalla Yalla, it is possible fellow Eurovision entry Javine could have recorded this whilst drunk and gangbanging MC Harvey, his asian mates and the rest of So Solid Crew just to show Alesha what she has been missing. Helena Papirozou would also be proud to call this 'unreleased' or stick it on an unnoficial myspace profile.

The Bollywood hip-thrusting Seret Hodi was single number 4, with svelte stabbing synths alerting attention to the dancefloor for an abrupt deviation from her usual svelte and stabbing pace.

The sleek and slinky sexdrive of Loveboy became Dana's biggest native hit since Diva and really ought to have been played on UK dance music channel Flaunt for her innovative use of topless rent boy back-up dancers alone. It is an adroit dance number not unlike Kylie's Fever sessions or a trashy H & Clair b-side, and her skimpy vocals are well-equiped to rival the likes of RuPaul or even Geri Halliwell. 'Hey daddy!' is coy as ever - this woman just does not do discreet.

The stroppy frothing-at-all-orifices grind At Muchana really shows Rihanna how it is done best - it leaves Beat Me Up & Drive for dust. Growling Dana spits her deadliest vocals, purging her bile to her decade-long critics. I cannot get enough of her carnal grogging, it really is such a visceral performance. A vitriolic triumph - her glamour disgusted and repelled by anything that isn't in awe of her trannylicious storylines. Her trademark wasp-like sting inflicts the histrionic agony she excells at.

The siren 'tranny in the building' alarm Eyfo Ha'lev (Where Is My Heart) wins points as the strongest album track: it is a rampantly melancholic and layered disco assault and gets a harder pounding than a blonde cheerleader in Iraq. Her foreign androgynous mystique shatters and grimaces under the S.O.S energy which betrays her impossible glamour. Shimmering guitars and full-throttle synths fight for the cause.

The sparse and sped up septic epileptic eurocheese of Ata Memagnet Oti is another derranged standout, with needle-like eye-jabbing precision and the best la la la's since Alexia, making the Italian nugget's anthem sound like a meditative ballad. Dana goes into throbbing robotic meltdown, plus it amusingly sounds like she is singing 'taliban' during the spurting chorus.

Below: a promo shot for the French-language single Lola.

The clogged-pore piano-poised ballad Yom Acher is her token slow number and is soggier than a tampon stuck on a cake left out in the rain. I am sure if I could speak Hebrew I would commit suicide under the weight of Dana's pathos, but as an English-speaker I am free from harm and safely understand what clicking 'delete' entails.

She does not let discerning Western gays off that easy though as the album closer Horbot is another crusty-snot acoustic ballad a whore might sing whilst travelling from village to village on a malnourished donkey.

The Danny Tuval & Zigo Remix remix of Hakol Ze Letova is another frost-bite dance ballad that snaps your fingers off just by listening to it, giving us some indication as to how Dana made her transition back in the day. It fully exploits the origina's chilly serenity, but soon simmers into a Middle-Eastern gay stomper - this track is so magnificent in its aloof turmoil and unrelenting emotional narcissism as it shudders in some sort of aesthetic disgust towards her daily tribulations.

Similarly, the Love Boy remix is the dancefloor winner here - it gives the original track a stunami trance engine missing from the swanky and kitsch original.

Throughout the torrid affair, her live-wire vocals splinter like barbed wire set on fire - her limitations are irrelevant when she transcends them with a molten iciness that, combined with a rampant addiction to arctic rave soundscapes, is her unique occupation. Her authorative release could nourish a desert or freeze over africa depending on the melody prompting her solemn yearnings or uplifting bravado one way or the other. What a brilliant post! I love Dana more so for her image than her music but this should rectify that. I can't wait to listen to her amazing tracks. Thank you!

Oh I hope you like at least 2 or 3 of the tracks, but I'd love to know what you make of it.