I am becoming pretty closed-minded when it comes to the music I choose - should it be the other way around? - and it would be unfair to write off the latest music presentation from 90s survivor Mariah Carey. It is a distinctly low-key affair from the Against All Odds singer, which is brave if nothing else. The grudge-bearing rhetoric of first single Obsessed is stylistically a red-herring - a feverish cummupence campaign that stubbornly broke into the American top 10 after weeks of deliberation - and yet confirms her lyrics are much improved and worth buying the set for alone. Mariah is nothing if not resiliant. 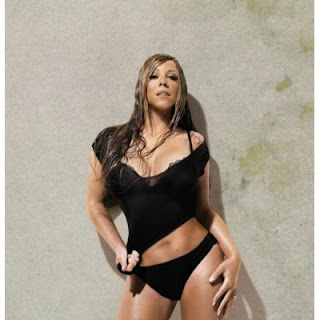 Her post-Virgin comeback got off to a false start with the, yes I shall state it, charming Charmbracelet album. The singer, whether her voice was shot or not, adapted her style to focus on the personal, the schmaltzy, and mostly on scoring a hit. That Through The Rain never became a bona-fide smash despite her valiant emotions splashing down in a storm of hell-for-leather histrionics, probably signalled appropriate reinvention was in order.

A balladeer from the outset, the plaintive We Belong Together was an arresting and raw-felt anthem that drew from her past hits as well as effortlessly soaked up a more modern and most importantly relaxed rnb influences. We know it was a smash, and its parent album delivered a few more hits and the whole era was Mariah at the top of her game on seemingly her own terms. EMC2 fared less well: idiosyncratic singles were disengaging despite a grope-prompting number 1 with Touch My Body.

So for her new record Memoirs of An Imperfect Angel the singer may as well do whatever she likes. The songs here are all creamy smooth and take some time to melt into your conciousness, which might probably be the only way as I have my concerns about radio playing this stuff. The songs are risky ventures into improvisation and give her a critical cogency that could go either way.

The earthy grooves of Betcha Gon Know provide a playful opener: Mariah's massaging vocals are delivered with gorgeous clarity and focus is on her eccentric yet highly-articulate lyrics. Song peak: 'Right in your face boy.' Ribbon begins almost af if taking the piss out of Lady Gaga's now-tedious Poker Face, it's an undressing lusty mid-tempo cut with sliding synths and the pervasice distorted backing vocal mumbling something along the lines of the 'mwamwamwa' melody at least.

Impatient first listening is not the setting Mariah has in mind for this record - the subtle glow of Candy Bliss is what the Spice Girls tried with Forever, but for Maz this is her speciality by now and again the hooks are unassuming and allow the lyrics to provide some vulnerability that isn't associated with the overpowering cult of her personality. These songs are littered with peek-a-boo ad libs that initiate her wit and enforce much-needed character.

The stripped down It's A Wrap playfully spins her addictive failed relationships kudos. The whisper-strength of More Than Just Friends has more sass to make up for losing the fashionable edge of her bigger cuts. The striking vintage-Mariah ballad Angels Cry is a distilled piano-rippling love song deserving of attention as a future single. 'Lightning don't strike twice' is gorgeously sad, and despite moments of melody sifting in and out of One Sweet Day, her narrative is the best of the album. There aren't even many teeth-shattering squeels - the focus is on her craft, and as boring as that sounds it really pays off.

The album is a series of interlinked slow jams gently unravelling - if Mariah is brave enough to sidestep falling into the trap of her own myth then maybe we should take a closer listen and patiently let the elements take shape. On these terms, she is at her most accomplished ever, and she doesn't cater to the We Belong Together Part IV many will snipe about these songs. Bravo to you, Mariah, you are not the man of the hour but better to create genuine ballads than resort to flickering the same old tricks time and time again. Memoirs is filled with laid-back, mellow harmonies of sassy midtempos of which occaisionally trigger the jittery, atonal forays of freestyle Mariah we know and love. Ironically, this is the artist at her most risk-taking despite all burning from the same honey-scented candle, and her impressive vocabulary and vocal decoration make the album a satisfying addition to her bloated collection.
Posted by Diva Incarnate at 22:10