Aons ago, in a strange time when Daily Mail readers and gays disagreed about everything except whether Dannii Minogue sucked, even Kylie herself would complain bitterly about all the ways Dannii's music career just wasn't alive. The younger Minogue's beefy beats and RN'B thrills stripped of human error, with producers exerting such cynical copyright that the so-called singer/actress was little more than a name on a worst dressed list. Haters wanted to deny Dannii outright, but unfortunately, there was truth to her that permitted a holy survival. The proof came whenever the singer made her pitiable attempts to 'cash in' with a personal appearances, marrying gay guys with eyebrow issues and flashing her baps to pay off debt. The thririving antipodean dance diva revved up her empty-tank pop career to full speed with All I Wanna Do and yet soon crashed and burned with the Girl album, which was a commercial write-off. Without label subsidies and concerted image buildup, Dannii and her baps seemed, like, literally unsupportable. Her bread and butter were brief sets in clubs designed for men to dance with each other: her name on all those flyers emoting the words 'failure', 'sister' and 'flop' over and over. Dannii put those cruddy PA's behind her. BraveDannii was invented (without cancer) well before BraveKylie, when the floptastic icon took her assets on the road, calling her much celebrated tour Unleashed.

Poor tickets sales could not deter Dannii from sticking through with her humiliation, astounding hundreds of UK gays with her Hi-NRG renditions of This Is It, (You Make Me Feel) Mighty Real, Disremembrance, All I Wanna Do and best of all Rhythm of The Night, which may well go down as the biggest surprise of her surprising career (the surprise is that she has one - how Dannii can be bothered has always amazed me, but boy am I glad that every 4 years she actually can be sometimes). 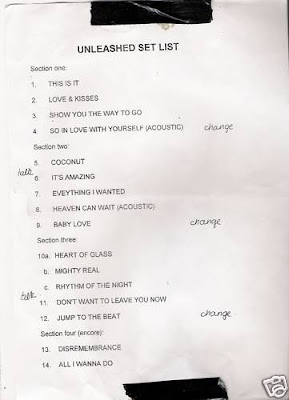 Her Sylvester cover is a campy delight, when she sticks her teeth into the verses it's hard not to picture her touching herself with one of the coconuts her crazy ass fan and moderator Nathansayz famously hurls at her whenever she stops gazing at him with wanton terror. The thumping Corona cover is simply enormous and it's a wonder she never threw it out there as a Girl bonus track or Singles single: the seed was perhaps planted whilst recording Free Your Love with the Rapino Brothers who memorably remixed what would become the definative version of the Italo-house classic.

Dannii's trance treatment of Heart of Glass is infinitely superior to the version she chose for her infamous 2006 tour of Spain: again, this could have been used to gain a quick hit for the hornbag. For once, Dannii's instincts to sing other people's songs actually pays off in spades (listen to Kylie try and sing her backing vocals from the audience 4 minutes in, it's bloody embarassing).

Like her dignity, Heaven Can Wait is completely stripped down - this song could sound gorgeous even if Kelly Llorenna were yelling it in the back of a police car with a cock in her mouth. She stays faithful to her back catalogue, strutting out Love & Kisses whilst being wolf-whistled, spicing it up with latin percussion and some reluctant crowd interaction ('are there any lezzas in the audience tonight?' etc).

Dannii clearly must have stripped naked at some point, even introducing Show You The Way To Go (politely asking Kylie to leave no doubt) she is greeted to the same wolf-whistles even during the soggy verses. Jump To The Beat puts her foot down, a splurge of epileptic house beats and trigger happy piano keys. Baby Love is a hot mess that truly comes alive in a 10% filled arena - truly spritual.

Below: Dannii has long been used to her sister copying 'everything I wanted' and yet Madonna's Hard Candy tour has been the final nail in the coffin for her.

Coconut sounds even more eternally vicious live - putting herself out completely, 'let me get it straight' alienates her whole audience who are too high on poppers to know where the exits are so stay put for the essential listening of It's Amazing, which somehow even Dannii stays awake through (I must admit though, the orgasmic synths are sublime and Dannii clearly starts getting her Playboy issue out when the whoops appear from nowhere).

Above: old and frail Kylie tried and failed to impress Dannii by selling out stadiums - Dannii simply pointed out that she had a cover of a 1993 corona song she could use at any time to destroy her older sister.
So In Love With Yourself is jaggedly intimate - I don't know how this would have catered to her desperate audience in 1997, but the song has evolved into a firm fan favourite and in 2010 I think a lot of gays would need carried out in stretchers if she started jamming this one.

The seductive self-regard of Don't Wanna Leave You Now is an odd choice of song to lift from the aborted 1995 sessions, but I can only assume it was to keep that ghastly queen Terry Ronald happy who was touring with her and co-wrote it. Everything I Wanted's dark and layered rich sound is slightly lost in a live setting, yet her rich vocals overcome what Dannii would later call 'key problems' and it's a surprise she didn't 'press that'.

The transfixing trance of the plaintive Disremembrance is beaten up with added thumps and bassline bruises in an attempt to liven up her drugged up fans. It works. Dannii never fails to deliver a vocal less than majestic on this one - the generosity she demands to 'remember me, remember me, will you remember me?' is inexhaustable.
All I Wanna Do's inferno heat is the Creme de la Mer of Dannii tracks - it's an astounding song that she'll never ever top and she obviously knows it when it lasts 7 minutes and 48 seconds. Her unmistakable diva drawl makes it worth every second.

Dannii might not have taken over the world yet, but the dance-pop auteur's tour was one hell of a $ucce$! Beaten and betrayed, above everything, I just love the way she sounds.
Download Dannii's Unleashed tour HERE.

This was an absolutely brilliant read - so creatively written, and I was in stitches the entire time reading it - bravo!!! Too bad no video footage of this tour has surfaced.

Too kind. I hope you downloaded the files okay.