Sinéad O'Connor - I Do Not Want What I Haven't Got

If there is a 'best one' to have been influenced by Kate Bush who can still sound her own woman, Sinéad O'Connor it is then. 'Sick one or clean one, the best one that God ever made' is her own remarks on the sex greed anthem Jump In The River. The really Catholic Madonna achieved global fame with her emotional cover of the Prince-written Nothing Compares 2 U. Jerusalem from her debut is her greatest song anyway, but the accompanying album I Do Not Want What I Haven't Got O'Connor was deservedly a worldwide 7 million selling success. She was 23.

My Mother recieved the CD album as an already-listened-to-and-recorded-on-to-tape gift for Christmas (I too would record CDs on to cassettes for my own use before handing over the discs as presents), and the verdict was not enthusiastic (nothing sounded like Nothing Compares).

It wasn't until 1998 when I became overwhelmingly obsessed with music as a way of privately identifying and exploring my sense of character that I started buying roughly 3 albums a week and soon raided the family livingroom to see what we had. There wasn't much finds in my parents modest collection (childhood favourites such as Gloria Estefan and the Pointer Sisters were still there, but I was after music with more confliction at this angst-ridden stage in my life). And so going back to this album I was totally unprepared for the ravishing sensuality, rage, grief and sadness all contained in her songs. 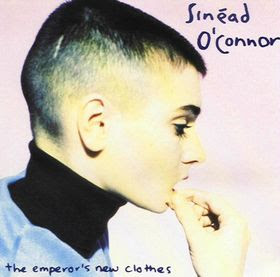 Highlights included the vividly sexual Jump In The River, the skillfully turned-out nakedness of Cause As Much Sorrow, the subtle plaintive euphoria of Last Day of Our Acquaintence ('I'll meet you later in somebody's office'), the chugging 'gorgeous mistake' The Emperor's New Clothes (Irish top 5, Canadian top 3), and the incredulous and raw Black Boys On Mopeds. Let's not forget her Prince cover of course, but I don't need to tell anyone about that once. The gentle moments are rendered by her striking vocal swoops, and there are so many lyrics, of which sound like ghosts we all learn to live with.

Her success feels as if it could not have not happened, surely the world was the only space gigantic enough for her emotions to rest.
Posted by Diva Incarnate at 14:08

Email ThisBlogThis!Share to TwitterShare to FacebookShare to Pinterest
Labels: I Do Not Want What I Haven't Got, Sinéad O'Connor