Colleen Fitzpatrick's first claim for solo stardum under the alias of Vitamin C was slightly thirsty for tunes, yet her playfully in control persona achieved a #29 peaking album in America.

The electric voltage of Smile is the beginning of her mutton-as-lamb role playing - sure it's not embarassing but this is the foundation of what a pop song should sound like and slightly unusual for a pushing-30 year old to be at this point. The fluttery verses are a dream, the chorus spiked with traces of Hella Good and she even ropes in Lady Saw before Gweny-Gwen pinched her for No Doubt's Underneathe It All. Her sexpot act is bubbling under, delivering a surprising genre hybrid pop song that was one of 1999's very best if not biggest. It did blush it's way into the Billboard Hot 100 at number 18. The solidly teenage Me Myself & I was lucky enough to feature in the marketing of hit 90s TV series Sex & The City (unlike Amber, at last she didn't desperately chase after for more). Unlike the Britney's, VC had the advantage of her sophistication. She just wants you to know she is risky too, and at least you might actually believe her.

The Max Martin meets Alanis part spoken word part stadium crusade Turn Me On dwarfs both these hits. Relegated to album track it is the secret winner of the lot. The cold chills and frustrated atmosphere of the verses are thrown off the cliff into the nosedive chorus. Unlike Jagged Little Pill era Alanis, this singer conveys anxiety as opposed to enacting rage. The lyrics could not be any simpler yet you still hang on to every word.

The sombre/explosive formula is repeated with soaring flair on her charismatic cover of Crowded House's I Got You, the 2nd avoided single opportunity: house beats bounce with air-tight rapidity and the middle-8 is a skyward instrumental. The wilting country-tinged Unhappy Anniversary is the then-29 year old more naked than her crop top videos on MTV. Her doubts even sound real.

Elsewhere songs such as the grungey sulk of Not That Kind of Girl and the standard pop parade pounce of Do What You Want To Do (complete with ultra sleek disco strings) are clinched by Colleen's not-so-innocent belief in her innocent mission.

Sex sells and sex happens. About Last Night is without conquest or surrender. In the words of Hear'Say and Cleopatra, loving is easy and VC is so clued up that she isn't even worried about being pregnant.

Tough cookie Fear of Flying oozes an appealing sense of sleaze. Passing wind, Boys & Girls (I'm sure she has her sister's backs first). Like any pop princess on the up, as on Money, it all boils down to world domination: 'those with the dollar are those with the power' is her sarcastic indictment of capitalism and thank you fo asking. 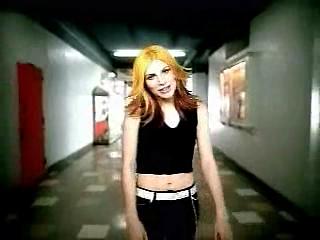 The words are sentimental wishful-thinking, but Graduation (Friends Forever) is the opposite of how I feel about my own graduation where I don't actually want to be friends forever with any of them, and luckily got my wish. Still, this is her prefab Never Ever style 'mega hit'. It sticks to you like a sanitary towel, but it's up to you whether or not you want to use it.

Vitamin C gives her full dosage of pop nutrition on Japanese bonus track The Only One, which was the subject of one of Diva Incarnate's first posts. One of my favourites, it's simplicity never wears off - think Holly V's Whoop or a less polished It's Your Duty by Lene Nystrom.

Even if her sophomore More album would be her masterpeiece, Vitamin C the album remains her pop skyrocket. She can sing in the same shower as Debbie Harry, but her summer spritzers Smile, Me Myself & I and About Last Night brush their booty alongside the sentimental country girl-pop of Graduation and Unhappy Anniversary, the dead-eyed disco anxiety of Turn Me On and I Got You, and the get-the-look star of the moment is able carry the load of get-the-hook fillers such as Do What You Got To Do and Not That Kind of Girl and still make them sound like she were a genuine 19 year old. Only Boys & Girls has no sense of adventure.

I love vitamin c so much, ur review really brightened up my day - u captured what i love about the cd

I was a freshman in high school when I bought this, it was very popular at the time. Both this, and her underrated follow-up were smart. At the same time, it straddled some conventional trends (for 1999 & 2000) in pop to make it more commercial.

I also like her work in Eve's Plum, which was very underrated. Their second, and final album, "Cherry Alive" (1995) is worth checking out. A bit rockier, more power pop, but good.

I disagree about "Girls Against Boys" though. That has a cool French, spy vibe to it. Then the hip-hop middle 8 is very edgy in and of itself. Good work as always.-Quentin

I do like that you appreciate things in certain tracks I hadn't picked up on. This debut solo album is stronger than given credit for (I Got You captures my imagination vividly, it's such a simple but killer lyric, and I Got You has the same kind of elasticated electro texture and speeds as Eurodisco by Bis). More is her masterpeice - she was slightly long in the tooth, but maybe that's why she managed to make the material, and on this album I'd say formula, so fleshed out and work.

I don't have the Eve's Plum albums, but the second LP seems to be the better one once again (Cherry Alive is a fantastic, sexy song).

Have you heard the unreleased songs Smash It Up and Learning To Love The Enemy, both recorded for the British music label V2? I used to have them, they are on my old PC which no longer switches on, and I can't find the CD I burned them onto. Both are very good, sound like demos, and most likely recorded for the album to follow-up the flop single Last Night.

I wrote about an LA singer called Nomi Madness and he did a cover of her song This Summer I. She's an interesting lyricist - she never loses focus of the melody, but she got quite clever at elevating otherwise ordinary pop into something that would deliver more of a sting.

It's a shame she hasn't came back yet with material - I think she last promised us 2 albums in 2007? I know she writes for Disney or something. A really striking, interesting and iconic artist.

I like "Last Nite," a cover I think, it has interpolations of "Heart of Glass" by Blondie, who I also worship.

Her cover of The Waitrsses' new wave classic "I Know What Boys Like" is so cheeky, the disco break is great. I had the maxi for "The Itch" when I was 15. Very dark & daring. Kinda what GaGa wishes she sounded like I think.-Quentin

It sure does - it sounds so cheap, but it kind of has this nervous rhythm to it that I adore. It was a #71 $ma$h in the UK, or thereabouts anyway.

The Itch is VERY Holly Vallance (similar to Kiss Kiss, Whoop & Down Boy). I bought whatever teen movie it was on DVD just to have the video, which has some really striking scenes (the elevator in particular).

Gaga's try-hard antics have to make you laugh when she's singing a song that would have been a Shania album track and using it as her campaign for people to recognise her as a serious artist who plays her own instruments. That song is Mutt Lange through and through - I despair, I really do 'lol'.

Sex Has Come Between Us needs to be covered by Dannii (when I heard Minogue's Spend Your Love On Me my mind immediately thought of it as a cross between Liberty X's Just A Little and Vitamin C's friends with benefits anthem).

Speaking of the cheekiness of I Know What Boys Like (sadly cancelled as a single after the saccharine As Long As You're Loving Me), have you seen her live performance of this at some kids awards show? It's all kinds of inappropriate and just brilliant!

Have you heard the Japanese bonus track The Only One? It's quite similar to the spiky songs Karen Poole was writing for other artists such as Lene of Aqua's It's Your Duty and Girls Aloud's b-side On A Round.

No, I have not heard TOO, I'd like to though. I could see Dannii laying into SHCBU, it has a very dark & sexual vibe, which Dannii always does very well.

Okay, I'm really bad for getting around to sending tracks, but I'll send some files (VC and some others) soon. I'm trying to get around to reviewing someone else that I'd be interested in hearing your thoughts on, but I have to publish the review first!