After Hole split up, Courtney Love couldn’t keep hers shut, fast becoming more and more of a car crash without the red carpet gloss we had sort of began to adore her for. And so before Hole come back with next month's Nobody's Daughter, the rock star's last flash of brilliance was simply her last album, 2004's America's Sweetheart, a solo one that was much more than a pitiable attempt to cash in on her personal destruction - it was an affirmation of just what makes her such a star wherein her shocking state is captured immensely on every thristy second.

Music lovers just grateful to be spared yet another Max Martin protégée weren't smug for long when it was revealed Linda ‘Christina Aguilera’ Perry was co-producing. The proof of Courtney's brilliance can't even be dimmed under Perry's production that is thinner than the singer's mid 90s septum. The commercial compromise is the reason it even got made, so I won't keep bitching about Perry if I can help it - in fact, Love herself puts blame on her old flame Jim Barber for the drowned sound. 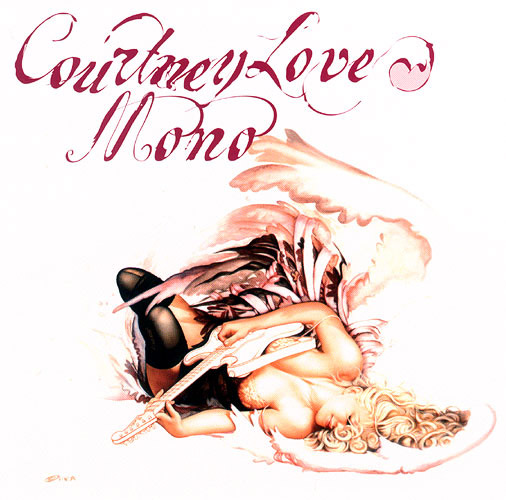 Aurally astute and articulate but - heavens no- not clean, nevermind neat, and much less mysterious, lead single Mono's guitar riff could give a lesbian a boner, is instantly noticeable and provokes a ferociously determined vocal that even momentarily sounds strikingly in control snearing to God 'are you, you are the one'. The chorus' blatant gender aggression proves she's not dead, not overrated and not over no matter what she looks or sounds like.

As on the sexually-satisfying vow to out-coke the fashion-conscious skinny rock stars But Julian, I'm A Little Bit Older Than You, it also helps that the emotional high of her songwriting sometimes approaches her medicated ones, although when 'the pornoriphic girl is me' you'd best duck or expect herpes. With a cute but tired-sounding melody, the heartrendingly broken Hold On To Me has a riff that's bruised and helplessly exhausted.

Attaching herself to literally any body, on the ravishingly sleazy I'll Do Anything she emotes words over the cruddy-but-importantly-loud guitar noise. The theme of exploitation has always prevailed for Courtney, and here she positively demands it at gunpoint.

The sludge of the guttural purge All The Drugs makes her voice sounds like her throat has got wood lice. She's dense, deluded and demanding, even if she out-strips Perry's abilities which leave us a bit short-changed.

Forever the valley gurl, she celebrates that 'my dress is the prettiest' even if she sounds like the type of 5 year old who had to hit the other girls for not being her friends. The very Celebrity Skin era sounding Almost Golden is Courtney smoking her Stevie Nicks LPs again. Thank God. The lilting Sunset Strip is just as good ('I got pills for my coochie cos I’m sore') - it's a toss up between these two for being the catchiest thing since . Both these tracks would be glorious Hole circa 1998 tracks, yet in 2004 sounded unwittingly tragic – 6 years later the guilt and concern from wanting her to sound better is now (hopefully) unnecessary and they do sound majestic.

She must have had a sleepover at Elton's, Uncool is the collaboration with Bernie (sadly, not of the Nolan clan) Tauplin, and despite the sweet lyric 'you're pretty face has grabbed the headlines' it inadvertently cultivates a pre-Lindsay Lohan trainwreck sensibility when that time is clearly past her ('I'm too young to be this old' she slurrs on track 7).

Likeable throwaways Hello and Zeplin Song both approach and miss their stop for B-Sides R Us, so you'd better get used to them being here. Ever the creative marketer, the singer sticks in a Smells Like Teen Spirit lyric (clue is in the title). Seriously, it's great to hear her with this much verve and cheek. They're not top notch, but at least she's trying, and she doesn't sound like the hot mess she actually is in 2004, with news on Zeplin I wasn't about to guess.

She does sound dismal on Never Gonna Be The Same though, but beautifully so. Just because her voice is crippled doesn't mean her heart is. She lives and dies singing these overwhelmingly sad lyrics, which at the time sounded like her last fingernail grip.

With her voice in shreds, it's no longer even pretty on the inside. She needs 1991-98 bandmate Eric, she can't lift the heavy weights on her own. Nobody's Daughter will sound 'classier', but this is Courtney getting an Avril makeover courtesy of Linda Perry and thankfully the shit don't stick - Courtney won't stay still and play game for anyone. We might deserve better than the state she is in here, but I can't resist the music. Her grand self regard and chainsaw-throat vocals find legs on the lead single, the hooker-slurred pomp thrills of I’ll Do Anything and All The Drugs, and a few others that are all more than worthy of being struck on some belated half arsed compilation, which might be the only other chance these songs get. Amazing artwork by the way.

I actually love this album. And Courtney. I really hope the new Hole album - which is really just another solo offering - is good.