With her petrol-curdling ad libs, like singing with her mouth full of melted liquorice, Keisha can communicate her powers even underwater to dolphins, whales and penguins - with Get Sexy alone she has helped the migration of endangered blue whales in order for them to mate properly whilst being coached by Buchanan's squeeling tenderness.

Above: Heidi's hips have never told a fib yet - 'help, cannot breathe' was their most recent tweet update.
The culled project Sweet 7's Keisha-included originals have leaked in the form of the album sampler now doing the rounds like Amelle deepthroating a stag party or using the local bus route ro make up the numbers (something she is good at). Forget baby seals, Keisha's ow-ow-barking vocals are killer and challenge her ostrich-face nemisis to a brutal fierce-off, with poor hapless Heidi blowing her nails dry until her middle-eights to sing about being a ladeee (she really never got over that Victoria Beckham line from the Wannabe rap did she?).

The shuddering About A Girl is already less compelling with Lady K's replacement Jade (of whom I actually don't mind and can forgive her Coco Pop's monkey with a wig 'beauty' for the sight of her chopstick legs alone), and Lady Much Amelle's belching 'party y'all' is like someone who has just been sick breathing right onto your face when you're not asking them to. The usually useless Heidi sounds good chirping away like an Topshop cashier who's finishing their shift in 5 minutes.

The air tight Get Sexy's cum-sharing vocals aren't likely to be effected since Mutya was able to stop her singles being re-recorded and the Keisha delivery of ehoing 'now-now-now' has been a tatoo for everyone's ears from day 1 of it's first play. Sorry Jade.

Jade takes another violin bow to the face on Wear My Kiss as once again Keish-Keish just keeps on bringing it and floors the skittles with her bowling-ball vocal destruction. With obvious similarities to Bananarama's terrace chant Na Na Hey Hey Goodbye, Buchanan is hidden in the mix until her verses express some much-needed ejaculating attitude (there ain't no one who spurts their vocals like Keisha-Babe). Heidi is once again a prop, and foil for the main show of K&A's ongoing alpha scrap.

Below: 'I might be fat, but my vocals are phatter!' Amelle might think she is Miss Everything to the Suga's, but even on 4.0 she feels like the rubbish tranny out of America's Next Top Model cycle 11 and her dry-purging vocal talent makes RuPaul sound like Aretha. Miss Everything is date raped a bit by rnb fatso Sean Kingston, but Keisha nails her vocoder tricks perfectly fine all by herself, and Amelle sounds miles better this way without her fag-ash-lil' rasp pissing the hell out of me. 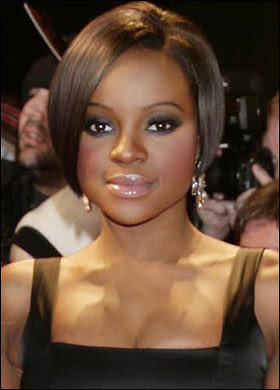 Sadly not a Lisa Scott-Lee cover, Wait For You begins like a Basshunter track before flexing the Sweet 7 electric muscle. It is my second favourite. The Cascada-meets-Whitney Thank You For The Heartbreak has a lead vocal from bad smell Amelle that is fed from saturated tampons, decayed fish and dried up KY. K's own bubble-popping chorus can't even save it, but it's like cherishing the last breath of the class bully before she's dragged out the room by lesbian janitors, one wonders what there is left to fear and admire. The umbilical chord to the Sugababes 1.0 has just been severed, and I hope those bland and butch bitches (yes, bitches) are happy with themselves - how very track 2 off 3.