Not only does Martina Sorbara look like Marcella Detroit on the front cover of Dragonette's new album Fixin To Thrill, she even sounds like her on the title track, yelping like cackling flames. The band reinvent themselves, shedding their skin and carve an even more stylistic and fully-fanged blood-pumping direction. Martina adopts a gland-swolen Cyndi Lauper scratch to her vocals, and the album is far less idosyncratic than Galore - no songs sound like handouts to Beyonce or Shakira this time. Martina's chisselled face is worth admiration alone, but album number 2 is another lightning bolt in the right direction. 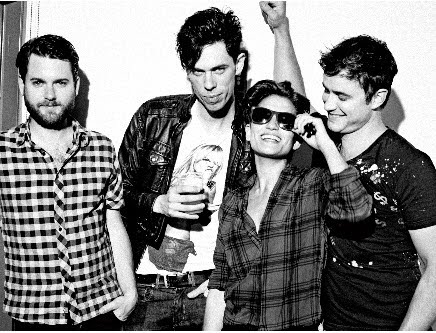 The expensive-sounding title track is a swaggering catwalk, unsteady and a bemused vantage point declares a torturous chorus unable to resist blowing up into mere pomp and thrill with no restraint necessary. With Martina's weeping yelps, the tensions are darker on this album, sharper and more bewitching, kicking away the crutches. Fixin To Thrill treads on hot tarmac - an intoxicating hysteria with a Garbage-esque video to match.

The hoedown song Gone Too Far shudders into a terrace anthem, which almost seems unthinkably perverse for such a glamorous band. Sorbara's throaty ashtray vocals are perfect, the banjo is a clear sign they aren't taking themselves too seriously and their kinky disturbances reverberate highly yet never smash into parody.

The bombastic Pick Up The Phone comes with marching verses and a cartwheeling chorus. Compared to the Richard X remix, the album version's engine starts to chug somewhat during the middle-8, but the dusty sunbeaming organs are crisp and brighter than an emotional autumn morning.

The tinkering synths which propell We Rule The World are worthy of an Erasure demo recording, with yet more metalic spine-twisting organs - the joystick-controlled melody is flighty and sublimely switches gears for the hell of it. Martina's clean-cut vocals are equally soft and balm-like on the conspicuous Liar.

Stupid Grin is the album's Get Lucky, but they do just that this time - stimulating synths carry the song from start to finish but lyrically you'd never know Martina was singing about punching someone in the face as her voice remains so perfectly inquisitive like a tarantula venturing outside its web. It features the most pointless choir since Madonna's Nothing Fails, but the shin-kicking lyrics are worth this minor stumble. 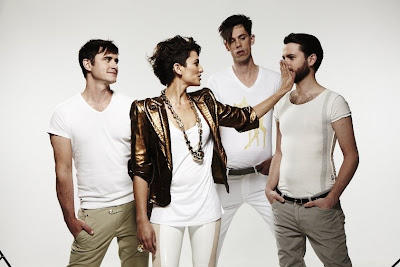 The trembling composure of the subdued Easy outlines more of a doodle than a song, but its dry riverbed melody falls into a dreamy 3:47 escape - their sleight of hand offering here exotic rhythm and suspenseful intimacy.

The bait-bitingly oblique camp stutter of Big Sunglasses might be the closest they come to repeating their walk-of-shame anthem I Get Around, but it's a head-tilting, cheekbone-flaunting caper rather than a slit-throat verse/chorus affair (even if both are evidently present, the charge isn't ploughing forward, it's absorbing inward). An engrossing, twisted spectacle.

The hop-scotch beats of Okay Delores are far warmer and nostalgically unburdened with matching the title track's histrionics, and Martina's itchingly shrill-close vocalizing is to die for.

Not many songs sound influenced by the All Saint's stoic ska single Rock Steady, but Come On Be Good is exactly that. Reflective closer You're A Disaster gives the album the 'light' touch needed for balance - Martina's tactile vocals work particularly well given simplistic settings to navigate.

Fixin To Thrill contains no earth-shattering surprises, but the shreiking momentum of the title track disguises a sweet thirst for galloping pop found elsewhere such as Pick Up The Phone or the perfumed atmosphere of Easy. Their symmetrical, primal and goofy flavour, dizzy waltzes and unfazed abundances are everything 2009 and beyond is crying out for.

Email ThisBlogThis!Share to TwitterShare to FacebookShare to Pinterest
Labels: Dragonette, Fixin To Thrill

Wow what a post.
I'm glad the album finally dug its claws into you. I love the god dame thing, i've almost played it to death, it's defo one of my top albums of the year