She of the lion king hair returns with She Wolf, a sturdy set with 2 or 3 leaders of the pack.
The taut electro disco of title track She Wolf is the album's beguiling peak, inititally seemingly by a mile but Shakira manages to pull it back like excess foreskin and engineers quite a decent album 3 years after her last one which was shit. No doubt helped by producers John Hill and The Bravery lead singer Sam Enditcott, its intoxicating, skin-shedding textures and career-best video have made this an instant classic despite not quite cracking the American top 10. Whereas Beyonce simply dances to warm herself up to accomodate Jay Z's telephone-box 'ego', Shaki climbs, hangs and dances inside an even bigger vagina. Entangled in such retro rapture, it's impossible to free oneself from the sticky web-like instrumentation of which is her all her own navigation: a ploughing corkscrew bassline, agile guitar riff and flowing hurried strings you could comb your fingers through.

Her toilet-flushing vocals sound alarmingly like a baby seal with a sore throat on the reclining modal operatiuon Did It Again. With hovering synths, in comparison with some of her other choices, it's a tame choice of single number 2 and almost certain to flop despite being 'not that bad' once this shock has settled in slower than giving Jay-Z free entry whilst sober - a bit of spit (and polish) and this could work. It's open-ended capacity is something to go back to. The windy strings hint to passing love, and 'did it again, but it felt so right' is the lyric, making it a wonder she didn't just call the song D'oh! instead. Lyrically, the groaning come-on Long Time's body-modesty is the styfled yawn of singing Whenever, Wherever for the 1000th time.

The Arabic-drenched Why Wait sees The Neptunes lagging behind Shakira, providing no more and no less than expected (or paid for) - the sort of sprightly production slightly rekindles the Kelis flame of her Kaleidoscope album, but the Columbia export deserves something a bit stronger than a stale signiture sound that has not evolved for 10 years (music is like Cher - it needs a new facelift every decade to stay interesting and shocking). To varying degrees, these Neptunes tracks are moist and misty dance tracks, but the turgic lack of imagination from this team has a lot to answer for when Shakira gargles decent howling choruses out of them, showing that things could have ignited beyond such glimmers of soul-rinsing melodies that merely arrive at intervals here.

The dry and brittle Good Stuff is yet more surface fluff, but shows invention with a delightful nod to The Cure's Close To Me. The familiar stacato beats peck away like one of Eve's 'bangers' with all the charm of Guy Ritchie penning a love letter to Sean Penn. Her door-creaking vocal once again bristles and saves the day, but sparse elastic dance segments don't have much impact if the most interesting feature to these parts are the singer going 'ugh!', which is my own reaction also. Song peak: the waltzing chorus sprinkled with The Cure.

Above: A-wooo is only ever appropriate if dancing inside a really big vagina (Michelle McManus has finally got herself a proper job hosting parties all over the Scottish central belt).
Paula 'where have all the cowboys gone?' Cole just got herself a new drinking buddy on Men In This Town where Shakira asks 'where are all the men in this town?' Haven't these broads heard of G-A-Y? A sure-fire hit complete with a gobby Luciana-esque rap, it's lubricated with a modern electronic sheen serving to add yet more fizzing gloss to her eccentric glamour. However, I object to its lyric hinging itself on the idea of 'real men' not using cosmetics, and yet her dreamy middle-8 seems to identify with extreme male vanity more sympathetically. This is easily in her top 10 English language tracks. Starting with melancholic guitar strums, a zipping bassline enters the fast lane and a note-bending vocal leads one stray into its gloriously incoherent and jaded frustration. Her banshee-purge 'so fresh and so clean' is the album's second illuminating catchphrase after 'a-whoo!'.

Above: Shakira fell asleep during her Neptunes tracks as well!
The love-wrapped Gypsy is a sunny, antiquated pagan ballad that sounds like a happy ending to Xena: Warrior Princess. The love-wounded repairing sentiments and her soaring self-assurance intersperse the album with a much-needed ballad that doesn't go over the top announcing itself as such, blending Cher, Cyndi, Stevie and even Annie Lennox (2:35!), but the aroma all belongs to she, with field-skipping rhythms errupting into full-on clapping.

Almost certain to be plucked as a single, her almost obligatory collaboration with Wycleff, Spy, is no surprise with phoned-in interracial interraction doing what it says on the royalty cheque. Her vocal-trumpet sound is interesting, her unapolegetic drone and the instrumentation is slightly jazzy - it's an easier melody to get hold of than her Neptunes results, but it would be worth releasing 3 singles before resorting to 'look it's the Hips Don't Lie singer, she's back with the same guy who used to be vaguley credible!' tactics which have already creeped through on her UK ad campaign for this very album, which is a little naughty given Hips Don't Lie is not actually on the thing.

Above: Shakira goes toe-to-camel-toe with Mariah with her new b/w bathing costume snaps.
Mon Amour is the final new song of the album and is a vibrant release of the vintage Shakira sound - Shakira was Alanis before Alanis, but it is very Alanis (as in old Shakira who had this sound before Alanis had it too). The melody has more impact than being slapped in the face with a large trout and the lyrics are the best of the album - basically Shakira has taken a dump in her ex's toilet and hopes it leaves a big stink or something. 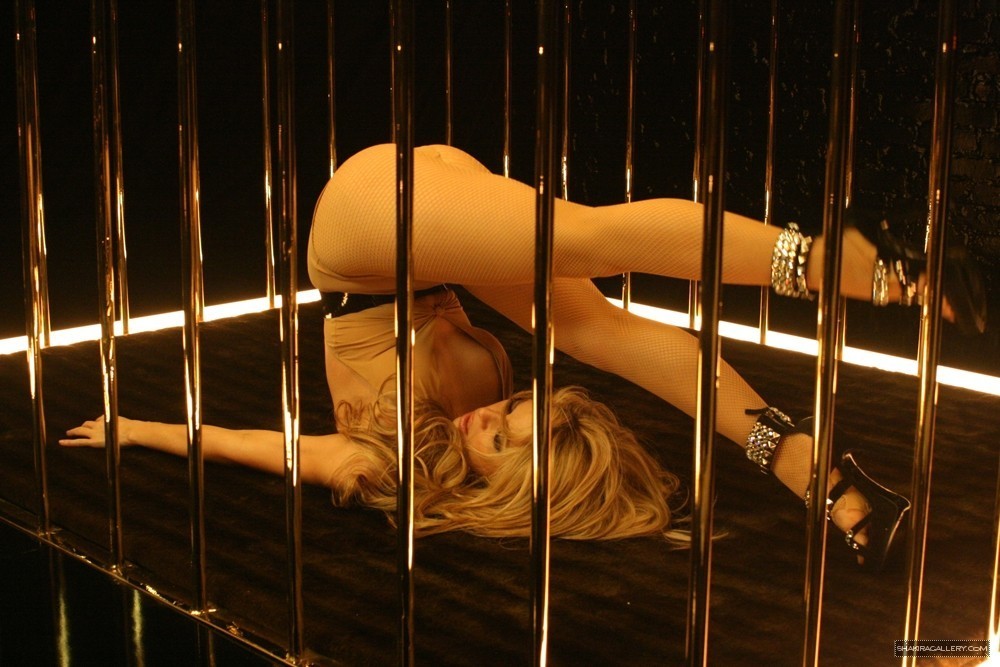 Shakira's never-ending brewing lust brings many songs to the boil, but is left doing the heavy lifting on her ill-focused Neptunes tracks - the shapeshifting title track is unassuming and one of the most captivating pop tracks of the century thus far, others such as Men and Mon are likewise full-speed regular routes for the star, but a few too many fail to raise the bar. Yes, my aliteration is contrived and so are the Herpestunes, but when her soaring self-assurance interrupts the club tales it starts a fire not easily extinguished.
Posted by Diva Incarnate at 16:37

Email ThisBlogThis!Share to TwitterShare to FacebookShare to Pinterest
Labels: Shakira, She Wolf, The Neptunes

I love this album. I just think Shakira needs to stop desperately trying to pleease American radio. "Laundry Service" didn't bother and it was huge, so why the desperation?