With anti-septic vocals thinner than a coat of paint, charismatic Norwegian starlet, discerning Geri-disser and acclaimed whisper siren Annie returns half a decade after her half decent debut and has not lost an ounce of her baffling hype even if she still sounds like an air vent on her sophomore set Don't Stop.

For the trigger-switching opener at first it's The creatures Standing There meets Destiny's Child Lose My Breath. Hey Annie kickstarts with gear-shifting ribbed percussion, rippling syths, referee-whistling, clockwork sounds and a pulsating bass liquidising into another dimension - the clotting, rubbery bassline is a dream but it's hard as fuck to focus on one thing when so many illuminating features are activated simultaneously. Her tooth-pic vocals are nimble and discreetly perfect, it swims amongst the most orgasmic currents since Madonna's denuding Skin. Identifying a pulse and a beat, Annie is starting from scratch - 'dance with me, just dance with me' she sneers with pen-knife promise. The playground chant of the title lyric swallows you whole with it's menace and sheer volume. Good times.

Yet her worm-eaten vocals could slit wrists nevermind make ears bleed, but with such a stunning ice-breaker, My Love Is Better now sounds so much better in fact. It's basically Long Hot Summer Part 2, and snorts the same lines as pretty much any other Xeonomania cheque-grabbing handout, whilst Annie's stuttering declaration is like listening to a WAG bad mouthing the mother of her husband's kids. Bad times.

The uplifting melancholy of Bad Times utilizes spiralling guitar chords and wistfully tremulous eloquence. If Annie's voice is sharp like sunlight, the crystalised disco-guitars rattle like a chugging exhaust pipe, creating an equally airy bliss when the chorus kicks in. Imagine Jane Wiedlin paying the bills writing ambient shopping mall music. The one-gear voice is no grain here even if they are a respective match for the steam-whistle of a stovetop kettle. The holiday take-off of the title track is another highlight.

After poking fun at innocent bullimia victim Geri, one can't argue Annie has no guts or originality, and so she is at it again on I Don't Like Your Band, but struggles to find a vein for her poison this time. It doesn't really do much besides accommodate various bleep and bloop sounds whilst she whispers her lungs out. Sounding like a remix of Chewing Gum, grinding the same melody but with less flavour second time around despite the noise trying to suggest this is the anthem of the century. It's frankly outshone by the retro-disco of Shakira's Shewolf or the vitriol of Girls Aloud's Hoxton Heroes. Despite the engaging throb of the music, Annie's formulaic intonations are far too twee to prop this disabled carcass into any kind of a sprint.

The stodgy electro number Songs Remind Me of You runs rings around it and is far more incisive with breathless synergy between singer and producer: deliciously sharp pulsating hi-nrg beats thunder relentlessly like clouds having a temper tantrum. Richard X's flashing soundscape is one of his finest and manages to sound like the Freemasons' expansive club remix of Kylie's The One and yet retains a sense of aloofness that could be no one else but face-like-a-stubbed-out-fag Annie. Whether the lyric is a cruel look-at-me taunt or of sympathetic attraction, the track is strangely foreboding as opposed to being carelessly celebratory and for once Annie's vapour-like vocals (not that I want to draw too much attention to them) sound outstandingly toxic as if inhaling deadly chemicals.

The downbeat melancholy Marie Cherie highlights the DJ's inability to convey emotion, but it has an infinitely wondrous quality. The lush storytelling has the serenity to make it as believably cinematic as Saint Etienne ('her skin's like velvet cream ... it was as if she wasn't there'), but her vocal deposits (hard and wet like rabbit droppings) are decidedly smallscreen however epic the ambitions are to be the next Celine.

Below: readers should take this post with a pinch of salt - how else can we achieve Annie's red-eye glamour without pissing off Chris Brown? 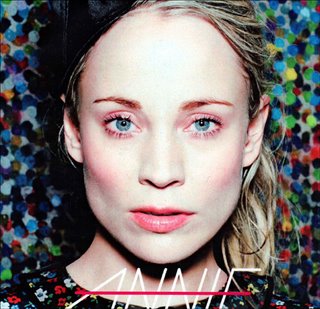 The accomodation offer Take You Home is hypnotic, seductively gloomy and calculating. Not since Marianne Faithful's Sex With Strangers has western civilisation been so under threat from a hungry vadge.

The Breakfast Song is a misfire. Her obsession with Geri continues as she purges out whatever bile as at the bottom of that barrel, hollering 'what do you want for breakfast?' at her arch nemesis via voicemal. ASDA and Tesco have ample selection of cereals, varieties of milk, raw meats and there's even Boots around the corner where she could just get a meal deal for £2.99 so I am not falling for it, you got that girl?

Thankfully Loco is back on track, and a motorbiking bassline swerves and shows off some badly-needed production agility. Annie's vocal may be one size fits all but it just happens to be tailor made for svelte pop outfits like this.

The aspartame-coated When The Night is almost laughably like a S.O.A.P ballad. Foggy synths are as gentle as snow and the singer's slushy vocals are poignantly limp as ever. Up there with the best non-single pop ballads of the 1999-2000 period.

Below: if she waits any longer she might give birth to a hit single.

The credits-rolling Heaven & Hell is dangerously close to being an outtake from The Singing Kettle, but not even a curmudgeon like myself can deny its ample charm. Her voice melts like butter on a jacket potatoe and Annie's album is the perfect bite-sized snack with no illusions of being anything otherwise, but that is not to say you won't be back more. You will want more. 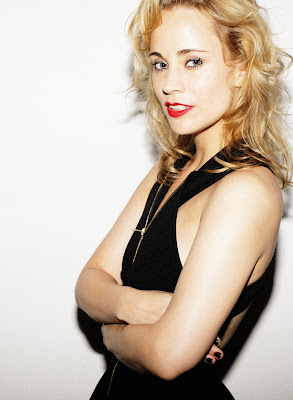 She might appear to be all talk, be vocally crippled to the point where her voice peels away like a sticker and sounds like Dannii's excess botox hissing out her forehead as Kylie sticks pins into it whilst she sleeps in her sling, but Annie has substantially upped her game second time around - she put Geri Halliwell out of her misery on Me Plus One in 2004, but Annie's best cuts in 2009 are gimmick free and despite the glue-sniffing vocals she can count me in as a kind of fan. I have seen cleaners outside shopping centres smoking on their cigarettes with more emotion though.

excellent review I think because she divides people you balance it out well with humor. I wouldnt pay much notice to the guy on pj - I suppose he has his looks to fall back on LOL.

ps I love your blog but never commented b4!