The Creatures - 10 Cuts & No Serious Bleeding When Siouxsie put down the Banshees, she and Budgie's continuation of The Creatures was no surprise, but their idiosyncratic endorsement of 'electropop' (yes, electropop, in 1999) will have raised a few painted eyebrows. Anima Animus is an album that creeps out from the shadows, flaunts and aggrevates itself in unafraid and unembarassed splendour as Siouxsies hungry vocals are sustained by Budgie's bulging breakdown nutrients of seedy exuberance. 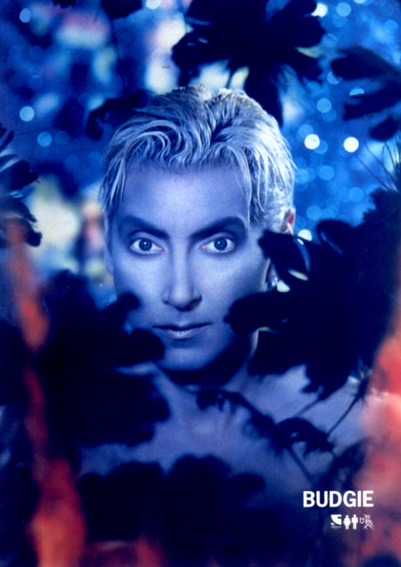 The pulsatingly claustrophobic klaxon dance cut 2nd Floor swishes with dizzying synths, but Siouxsie's pushy reassurance is the most lethal injection of all. With dense beats at speed, Budgie's rhythm element maintains it's a decadent affair, and the venomous vapours encourage her hospitable snarl ('why fear death? death never heart no one').

Less melodically induced, Disconnected is foreboding and tense - what better bait to amuse Siouxsie into irritated howling? 'Make the heart grow fonder, then obliterate' is about as nice as it gets. 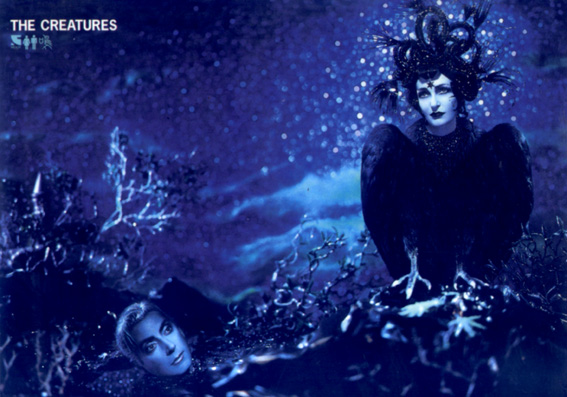 Fully out the cage, even more belly rumbling is evident on Turn It On's transfixing adrenaline has a passionate Spanish influence ehoing through the forceful disruption of Budgie's rampaging percussion. What makes the combination of these two so formidable is that Siouxsie shapeshifting voice has no allegiances - it's cat and mouse between them both.

The spooky chills groaning through Take Mine disguise a vocal that might sing 'take mine' but seems to simultaneosuly snatch it all back. Hear threatening disapproval turn sorry and disgruntled. 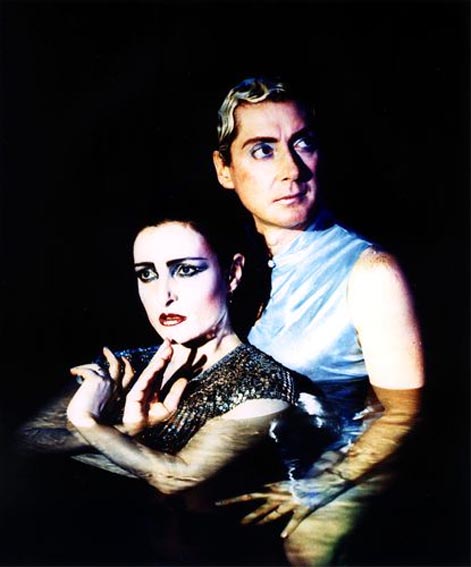 The cold contemplation of Say kills me, it's so beautiful, finding solace in something too abstract to place, a desolate landscape perhaps, with a boiling aquatic current. The sounds signifying loss and an aching sadness Siouxise simply dillutes herself into. 'I heard the news today, Billy's gone away' is delivered tersely and that's why it works - folding an irreparable subjectmatter into the structure of a rhyme just feels and sounds appropriate, she's not playing coy and acting messed up. Concise lyrics convey the damage with simplicity. Ironically, it's not what is said rather what is simply felt. Siouxsie's gloomy residue and the grimy technology are at a loss in uncomplaining disorder and grief. It's a struggle that is more than earned.

The acoustic I Was Me is almost petulantly sulky but with the young posturing of Shirley Manson's S&M robot-rock at the time, you can't blame paranoia to creeping through into the vanity of the original being such an obvious influence for a more commercially succesful imitation. 'Same lips, same hair, same stare' toothpics with knowingly catty disgust and horror that isn't even over the top - seathing 'I swear ... it's on the tip of my tongue, oh, oh, yeah' before Budgie's militant soundscape purges ahead. 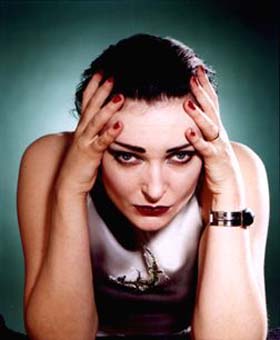 Stimulated by visceral moodiness, movements and tensions, Prettiest Thing was the final single to also get nowhere in the charts. Siouxsie's greedy attention reminds me of Depeche Mode's Blue Dress. Lip-licking lyrics such as 'razors edge sliding in, wanna feel my fingers dipping in ... what a beautiful violence moving in' are absorbed into the build up of tinkling sounds, and a hovering noise fades out in carnivorous bliss meets Donna Summer I Feel Love. 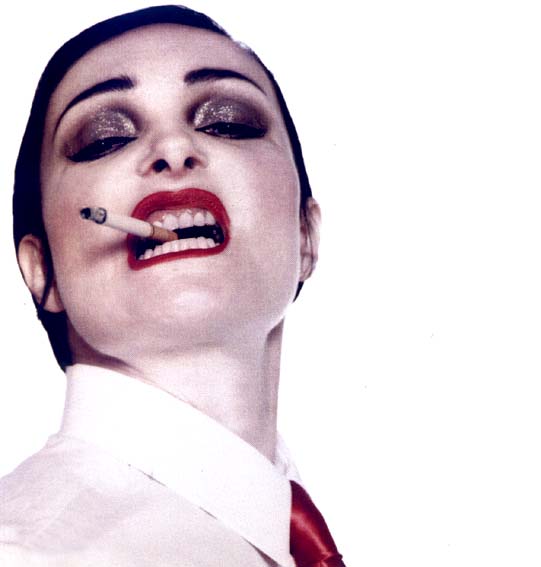 The perverse rapacious disco thrill and strident apocalyptic kinesthetic fury of Exterminating Angel is faster and angrier. Not to draw too much of a fine point about her urine lyric ('piss on it, I'm sick of it, I wanna fuck it up for the hell of it'), but the cardboard case for the album alludes to a sleaze found much throughout. Sioux immediately seizing authority, howling and unleashing an impossible escapism if disjunct, claustrophobic malcontent, and blistering disdain. The track is alientated, depressive and revolting, yet wathed in a gauzy glow that proves truly immersing time and time again. That the bitter rage never sounds like a complete sham (and it is mortifying) consumates a miracle - it's resistance not hostility (same goes for when she told Paris Hilton to fuck off). 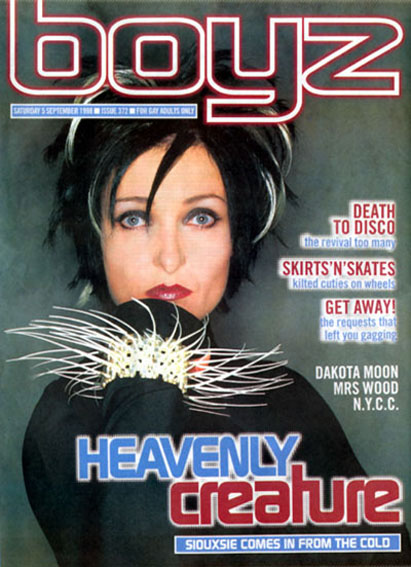 Boasting the best 'ahhhhhhhh' not to come before chanting 'spice up your life' (seriously), Another Planet is probably the only song that remotely resembles a vintage Banshees song, but even then it is an average tour de force moment - the only moment where their rock-association seeps through, 'with a twisted edge' (for comfort of course). We've also heard much the same before so maybe that is also it, but Siouxsie's fierce exotic vamp is still an amazing fuck-you. 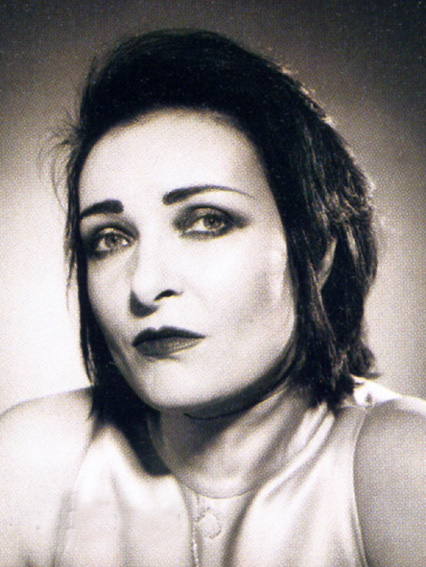 The bamboo percussion of Don't Go To Sleep Without Me supresses xylophonish tinkles that seem to threaten one's spine -sometimes Siouxsie's superstitious similes scream louder than a shout. An atmospheric, breathy conclusion that stays in your head long after it has finished. 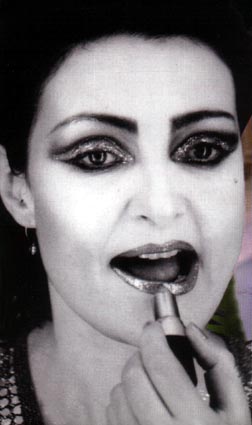 Constricted and contrived for sure, Anima Animus is not without its creature comforts, preying on disco (the illuminated abuse of 2nd Floor and the phantasmagoric Exterminating Angle hunts down and inadvertantly spoofs a dancefloor euphoria that Donna Summer would need to kill for, not that they are in any danger of servicing the same audience), aghast acoustic cynicism (I Was Me), the hushing threat of Don't Go To Sleep, or being aware of other people (the surging ripple of Say), it's an unpredictable and unlikely predator of optimism (Turn It On is practically Siouxsie letting her hair down on a hen night). The songs growl, grow and expand on their own accord, just as Siouxsie howls and whispers instinctively: distorto-disco incarnate. 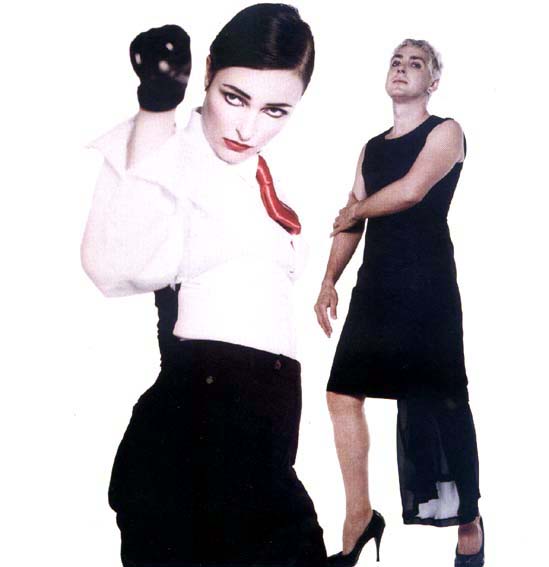 Medium-priced with only 10 tracks, outtake Red Wrapping Paper is worth the investigation, as is Sad Cunt if only for the lyric 'got no mouth but you need to scream' (indeed).
Posted by Diva Incarnate at 23:09