Fresh off the heels from Fresh!, dance music's next big thrill was fresh off the boat Cuban superstar Gloria Estefan who released her mighty quite-alright opus Gloria! album, stunning her MOR fans with a record full of fast beats, feminine quips and feirce campness, all combining to revive her career just in time for the pinnacle of cougar disco of 1998-1999 (Diana, Tina, Cher, Madge, Olivia, Bette and Belinda were all at it).

Thrusting herself into gear was the first single Heavens What I Feel, wherein Gloria's craving for a gay disco hit turned her into such a nervous wreck that she failed to even write this one herself. Lubricated with self-esteem issues ('I was not supposed to fall in love with you' she sobs), she doesn't quite have the vocal range for all the notes, but this merely adds to the drama - and the gays do love their drama you see, so job done Glor. Danceable phoniness at it's most, dare I say it, glorious.

Starting with sunkissed cooing, the singer's infectious gurning goes full pelt on the fastlane disco pounder Don't Stop ,which should have been the album's secret weapon, instead it was relegated to being a Spain-only release. Campaining against the male orgasm calls for a weaponry of succinct beats and a militant belief in dancefloor cliches such as 'today is here to stay'. Not even Lonnie Gordon could match the epic request 'don't stop the earth from turning'. Cringe-fest Oye's male chanting sounds like being gangbanged by a bunch of waitors of all ages when you tell them you don't have any money to pay for their latin cruisine. It was chosen as the second release from the campaign, pre-empting a barrage of bad J-Lo and Marc Anthony singles, Gloria's authentic latin grasp is a little faceless for my liking, but I do love the predatory 'hey boy, I see you looking' verses and tongue-rolling 'can no longer fight it' bridge. In spite of the mess, it's so insistant it would probably only take me 3-4 doubles to drop my pants for it. 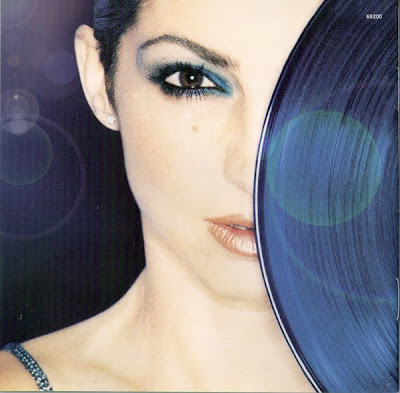 On this next track you won't get a squidgier shimmy without having more than one STD. She really surprises me on the hot flush Real Women: I expected something horrid, but the clotted irregular dance beat groove is irresistably ribbed and smooth in equal measure. The song title means nothing to me, thankfully avoiding the fashion to define a real woman in terms of curves and what not, it's still gay-friendly. The emphatic energy is as weightless as the handbag you'll be swinging above your head listening to this whether you have to steal one off an old lady to get one or not. Feelin' is an easygoing midtempo Lil' Suzy style throbber. It's pleasant enough, and continues the promotion of a consistent gloss throughout the album. Infinitely propped up by Love To Infinity as a bonus track.

Anti-agnes album track Don't Release Me is an unecessary collabo with Wyclef Jean. Estefan's tickly crooning just don't cut this way sadly. Various ploys are used, such as a briefly enjoyable Chic-esque disco section that at least makes the second half vaguely not bad. The dizzy momentum of speed-ballad Don't Let This Moment End is a pulsating toilet flush of a dance track. It's ironic that by the time of this song's 1999 release that good ol' Glor was already being accused of copying Nana Cher's comeback efforts. Admittedly, it wasn't strong enough for haters to see beyond a supposed tactic of turning to the pink pound for a quick buck. It was also so good that I am worried I may have forgotten to include it in my 3 part best singles of 1998 post. Despite being one of the least adventurous tracks, the track is tempered with flourishes of tinkling piano keys and light-headed strings. Her agony is convincing, with neck-snapping beats encouraging the best out of her on the soggy chorus pledging to keep things going. 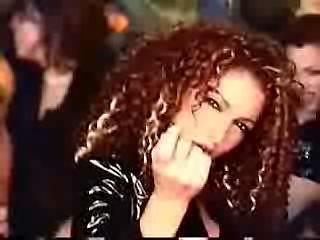 If being molested is your thing, Touched By An Angel is another uplifting surge of those everything-is-going-right moments we all strive for. Corny for sure, I just wish it lived up to its title and I felt more violated.

Dodging the ballads yet again, the smouldering Lucky Girl tosses up the same ingredients of Rhythm Is Gonna Get You, which is no bad thing, but the similarity is distracting on the first verse (the mistake isn't repeated thereafter). The chorus' skirt-flapping and sizzling tempo get things going and its stinging piano breakdown sounds identicle to the one of the Almighty single edit of Alexia's genre-defining Uh La La La, which are amazing qualities for any song to feature.

The thigh-chaffing salsa stomper I Just Wanna Be Happy serves as the album's anthemic Go Away/Party Time trump card. How she has pulled this trick off 3 times never fails to amaze me, this was the Single Ladies of its time with Queen of the jungle style tribal callings that Beyonce could only muster if her car broke down right before she reached the drive-thru window to pick up her chicken wings. Third single from the album Cuba Libre reached #3 in Spain. Compared to the heat that preceeds it, this one's silky groove is a bit too vanilla for me. A solid finish. 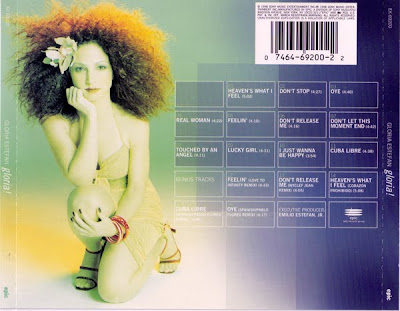 The album is a compelling triumph, a latin platter of hot and thumping latin jams and oozing orifice-itching latin jams too. Even if her velvety timbre isn't strong enough on the slower jams, her raw technique on the sleek salsa montuna Oye, gushing lead single and the more willing and faster Don't Stop (sadly not a Kelly Marie cover, cue next post) amongst many others provides enough evidence that she is ready to make it worth it when it counts. A dance album so good it must have scared the shit out of J-Lo.

Skip to: Heaven's What I Feel, Don't Stop, Touched By An Angel, Lucky Girl, I Just Wanna Be Happy One of my favorite dance recordings ever. She started off in dance, so it was a nice return. Her new one, which I'll be buying, has big shoes to fill here. I did an article on this, when I first launched the The QH Blend, during its ten year marker.

Personally, this record had far more pulse and personality than Cher's album that dropped in '99, but whatever.-Quentin

Well I'm a big fan of that Cher CD - I prefer it to the more glossy and expensive Living Proof. It has a makeshift charm, as if they didn't really have much of a concept beyond Cher hearing Gina G's seminal Fresh! album.

This Gloria! album is a sturdy collection of reliably solid dance music. I rate it highly too, and your review was stunning.

Her new album sounds dry of hits, but still very good - I bought the title track, and have to say it sounds great on the old headphones. She won't be troubling the charts with it though. What do you think of her voice - do you think it has got a bit nasal over the years?

Her voice is stronger & richer in Spanish. So her vocal strength has always been on those recors. "Mi Tierra" & "Alma Caribena" are firm favorites, her last album "90 Millas" wasn't terrible either. But voices change, I like that her voice has gained even more texture, which is had already.

I like feeling a singer's voice sometimes. It gives it weight, but I may be bias as I've loved Gloria for a long while. I'll be buying this Tuesday.-Quentin

I think she shines vocally more in her native tongue. If you haven't, please check out her Spanish work, "Mi Tierra" and "Alma Caribena" are the best of the four.

That said, voices change. I haven't noticed anything to drastic with Gloria, a bit more texture yes, but nothing terrible. I can't wait to hear it when I cop my copy Tuesday.-Quentin

Oh, thanks for the up on my review, much appreciated as always.-Quentin

Well I was definately pleased when I heard her vocals on Miss Little Havana, but had read someone slate her vocals as far too nasal, so thought I'd as the expert:-)

OH.MY.GOD. I love Mrs. Estefan's new album. I'll let you wait for my formal review on the site to get my thoughts, but she went in. I am SO impressed.-Quentin

It's wanting hit singles, but I agree very impressive. I may even write my own review.