Deee-Lite - Dewdrops In The Garden

Diva Incarnate is a massive fan of Deee-Lite: so much so that to review their classive debut album World Clique is just a tad overwhelming and, well, kind of puts a lot of pressure on a writer to articulate sometimes purely visceral reasons as to why something is one of the most important albums to have influenced their pop aesthetic. Enough nonesense then, their third and final studio set Dewdrops In The Garden was nowhere near as immediately succinct and unflinching in it's innate explosion of charisma and innovation, but stands a chance at claiming to be just as impressive as their landmark debut. 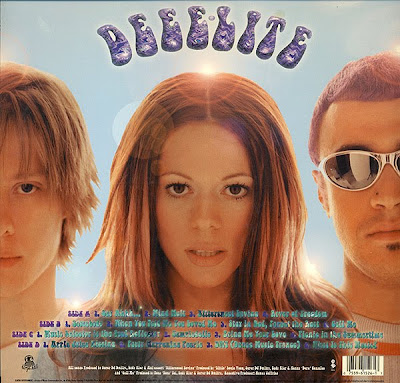 It also saw key member Towa Tei dropping out the troup and merely producing one track. In his place steps in DJ Ani (pronounced 'on e' of course), who later justifies himself with a remix of a track from their sophomore album, called Don't Give Up. The grooves on this album are more sensual, Kier proves herself as a fluid rapper, and they almost clinch themselves several early 90s potential dance hits yet fail to properly exploit such poossibilities by admirably sticking to the oozing rave trips and their label Elekra by this point clearly weren't giving a fuck either.

Say Ahhh... is the mellow opener, a buttery-dripping rap from Kier and her most natural vocal yet. 'Take off your shirt, I'll take off my bra, keep holding on until you say ahhh'. Kier's final withdrawing 'yeah, yeah ... yeah' could finish anybody off. Mind Melt is effectively an interlude, a poem written by Ani's Father. I still recite the emphatic delivery of 'come around, come around' to this day.

Bittersweet Loving is the first of two emphatic shots at achieving a genuine ubiquitous dance hit that ought to have joined the ranks of Haddaway, Urban Cookie Collective and Sybil. Kier and fellow member DJ Dmitri's relationship had severed by this point and Kier's emancipation is gigantic as she sings rapturously 'I've never felt so free before' with a vocal authority second to none:

The jiving 'put some sugar and stir it up' is even more uplifting. If the album version doesn't quite hit the spot (it's probably too dreamy for its own good in places), the Todd Terry mix is favoured sometimes by myself for it's lethal sharpness.

Above: some 2-dollar tranny whore earns her cash - what self-respecting gays are giving away their drinks money?
The elasticated roaming bass on River of Freedom and it's hallucinatory trance make it my favourite Deee-Lite track ever. Kier's vocals are heartfelt and lush ('the sails are made from our dreams, there will be better days down stream ... we've been building ship for years, because the river is made from tears'). It just has that vanishing point all good dance tracks should have, where you feel completely immersed and distracted. It flits from detail to fascinating and ultimately meaningless detail. Crucially, the melancholy flashing past is anchored by a stunning tune and sounds so simple a zonked zombie can relate to the pathos. What is a shame is the track ends up getting tangled up in its final minute, although I do enjoy the burping bass continuing to rev itself up even if it's sort of running on empty.

Below: Lady Kier does her thing at Wigstock debuting the song Somebody.

For years I kind of despised Somebody - I thought it was just nothing. Years later and I'm completely drugged by Kier's leadership vocals - she truly comits herself to this one, which is more of a hardcore vocal track than anything else. Perhaps because Towa's insanely unique production has taken the stabelizers off, this track is examplary of how distinctly different Deee-Lite are here. Again the track ends as if being mixed into another track, except it's being 'mixed' into a final minute of simply concluding.

The jazzy A Tribe Called Quest-esque When You Told Me You Loved Me is bizarrely the closest they come to reaquainting themselves to their signiture style. It's hard to resist Kier's persona which is smudged all over this like being french kissed by a million drag queens at once.

Keir's languid rap on the oozing Stay In Bed Forget The Rest (a subtle pun I didn't get until a few years ago) actually sounds like a dimmed light. Pssst-ing for attention. Fall asleep with paradise, dreams of tahiti'.

The ultimate telephone song, Call Me is the album's What Is Love or Pussycat Meow, except it's a bedroom chill-out and not an explicity flamboyant dancefloor jam like their previous doodlebeat tracks. I love how Kier starts off a one-sided conversation responding to what we can obviously guess involves getting the subtle brush off, before turning the tables when at the finish it is the person at the other end of the line getting their wires cross and Kier then gives this love interest the 'I'll call you' kiss-off herself. The sherbet-frosted ambience filters all the right settings courtesy of Towa Tei. Fans of Kylie's GBI might be interested to hear the true partnership for such perfection. The evaporating blissfulness of Music Selecta Is The Soul Reflecta is a humming throb with Kier's delicious deadpan refrain, 'give is a beat, slammin and jumpin'.

Sampladelic is a convincing update of Deee-Lite Theme, 'catch the relic, the sound is sampladelic, yeah' excites with almost as much fervor as 'from the global village in the age of commication did' back in 1990. It really could/should have been the opener. I was in the checkout line Checking out the mighty fine By the time I got to the parking lot I took home more than what I bought You’re my tenderness My chocolate drop Don’t you ever let your good lovin stop
And yet it's pace is fashionably stop-start (before it became properly utilized by top 40 dance songs), which kills its catchy potential and this is probably why it remained a club release only.

Above: since the official video for Picnic has been disabled from being linked, here is a live performance of Somebody, a track given high status from the Dewdrops era.
First single Picnic In The Summertime, possibly one of the most underrated summer song, is track 12. Casual music buyers will have switched off by now, but the soul mama come rapper invites you to 'come at me like a panther 'cause you know yes is my answer'.

Arguably even better is Apple Juice Kissing, with a Clash sample and more immediate rhyme and 'smack on my lips, apple juice kissing makes me roll my hips' being a miles tastier hook.

DMT is another trippy episode with an under the influence foggy mise en scene.

Above: performances of Music Selecta and Bring Me Your Love from the 1994 Rise Up tour.
What Is This Music is a 30 second outro before they blow their chances with Bring Me Your Love yet again as a remixed hidden track. Oh well, they certainly did try and Dewdrops In The Garden is totally worth the initial disappointment of not being as good as World Clique as it's an amazing album that should be judged on its own terms - they were a new band by this point. Sometimes feeling as if you really need to be taking the same drugs, their florescent fashion is worth gasping at whatever your sensations.

An ever so slightly mispalced sequencing and occaisionally mis-judged mixes regarding track durations almost distract from Deee-Lite giving us perhaps their most committed and trying performance yet. Kier kept her heartfelt groove and the rivers of applejoice kisses prove they still had a thirst for beats. The pop momentum is patchy, which could have been avoided, but Kier's voice - ambitious, ebullient, moist and full of femme - is their tour deee force that any diva who sets out to create inclusive dance music had better go for every time out.
Posted by Diva Incarnate at 03:11

Email ThisBlogThis!Share to TwitterShare to FacebookShare to Pinterest
Labels: Deee-Lite, Dewdrops In The Garden

lady kier has a new track. lemme know if u wanna hear it.

Many thanks in advance :)