Of all the rotten things to happen in music world, the death of Cyndi Lauper's pop queen status ranks pretty high. The impact of her She's So Unusual singles arguably paved the way for Madonna to follow, but I shall try not to 'go there' as I think some Cyndi fans concentrate far too much on this. Cyndi's mistakes were already evident on album number two: culling the pop hits for MOR ballads did her a lot of damage, but she just about got through it well enough to forge on to album number 3. However, her concession for this argument, a knee-jerking song called Hole In My Heart (All The Way To China), stalled at number 54 (whilst songwriting all the way in Russia) despite its engagingly manic scramble. Lauper was not in the country to promote it, radio weren't playing it either, and so it seems likely the decision was made for Lauper to record radio-friendly hits that weren't desperate cariacatures of her debut album. However, her third album A Night To Remember was still very much desperate with only a clutch of songs that frustratingly might have saved her ass had they have been released with vultures such as Susannah Hoffs only to eager to re-record Lauper's overlapses. Lauper singing generic big-pop would not be my favourite era, even if 20 years later her distinctive hair suddenly came into council estate fashion.

A Night To Forget: Let's get the worst of it out the way first:
I was actually going to review the 'bad' and the 'ugly' on this album but really can't as it's such a frustrating album in that respect, so shall focus on the good.

Sensual rocker I Drove All Night might have been recorded by Roy Orbinson first, but cynce Cyndi released it first it's fair to say her version is the original. Again, radio ignored it but she still managed what would be her final US top ten hit to date. In the UK she faired better on the airwaves, scoring her first UK top ten in 5 years, and this success propelled the album into the charts at number 9 (to date her only UK top 10 studio album).

Sadly overlooked as a single, the romantic ballad Unconditional Love was hunted down by The Bangles singer Susanah Hoff's who later recorded her own version (look out for a forthcomin g post on Hoffs coming soon), and expressed her rueful jealousy to writer Billy Steinberg who told her they would 'write something better' together, and that they just did with Eternal Flame. It's so strange to hear something from Lauper in that calibre - it's a hit single and would have been regardless of who sang it. This is ripe late 80s American chart topper fodder par excellence. Bittersweet pleasure I guess. 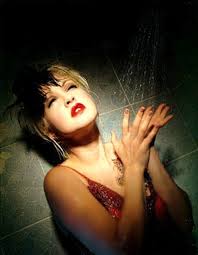 Once again, on the title track Lauper sings in a lower key than what people were used to and still sounds unmistakably Lauper, perhaps Midler-esque, but divine in her own right nonetheless. It's a bit of a joy to hear her sing this, toying with a shyness and untamed angst even within the same line. My favourite is the way she delivers "I hear your voice...haunting me" as if completely unconsious of how vampish she sounds. I wish she'd go there again. This song was in fact released as a single, with a gorgeously iconic cheap video to accompany it.


I sort of grudgingly include the Bette Midler-identified I Don't Want To Be Your Friend in this bad album's good section. It's still a rotten tomatoe, sounding like the way a crying person, who needs to blow their nose, gives an account of something in a hysterical fashion. Lauper drastically re-worked the arrangement of the song written by Diane Warren and the story goes that Warren found out the song was set to be the second single and personally put a stop to its release. It's a really devastating story, and I still don't understand - if true - why someone would do that. Sure, I have already stated what my suggestion for a single would be, but this is a big bit better than both the ghastly My First Bight Without You and the contrived mess of Heading West.

Email ThisBlogThis!Share to TwitterShare to FacebookShare to Pinterest
Labels: A Night To Remember, Cyndi Lauper

Ok. Lol. My theory with Cyndi's loss of commercial prowess was based partially on her image. It was cute and spunky in the beginning, but somewhere between her debut and the uneven (but unsung) second album, Cyndi lost the plot.

She started focusing one the WWF, thanks to her former boyfriend/manager David Wolff. So, when she did get her head out of the clouds, and got majority of her focus back, she'd lost, maybe a year in momentum? "True Colors" was a much stronger & varied work. It is the trinity of toss away mess that closed TC that ruined it. There's a great b-side called "Heading For the Moon" that so should have made that album.

Anyway, then she took even more time off, shot a movie, "Vibes," and did "Hole..." for the soundtrack and for what was to become ANTR, which was intially called "Kindred Spirit," with the total miss of "Hole..." (which I also j'adore) she reworked the album.

ANTR isn't terrible, because it was a major step forward. Yeh, there are som questionable maneuvers "Like a Cat," and "Primitive," but I adore majority of the project otherwise, and Cyn's ballads have always been her other strength, she was never a convetional dance-pop act, she had a broader reach. That's probably what made "Bring Ya to the Brink" so amazing.

I will say I prefer this to the dreck of LaP by Madge, which failed in ways that this album succeeded. If you haven't heard the b-side "Unabbreviated Love," it was the flip to "My First Night Without You," you may want to. It was one of her best moments.-Quentin

Unabbreviated Love is interesting as it's production core sounds similar to Like A Prayer's - and both sound slightly like those of Gloria Estefan. I'm shocked that you say LAP the album was a failure. And do you mean dress-rehearsal album as in TB was a clear stepping-stone towards what LAP (the song at least) achieved.

I lost faith with ANTR - only Unconditional Love truly shines, and why she never thought to release it is beyond me (it was a single in one territory, but it was a minor release in 1991).

Sisters of Avalon came very close to being a long-overdue cross-over album - Hot Gets A Little Cold is the Joan Osborne/Sheryl Crow ballad that would have been a nice single.

Back to ANTR, I just don't rate it. I've heard Hole basically bombed (in America) as she wasn't in the country, but despite its brilliance is rather eratic for those not under the spell.

And Open Your Heart, you'll know, was written for Cyndi, who never got to hear it. You can hear Madonna doing her best Cyndi-isms on the extended edit (her Who's That Girl persona was very Cyndi).

In terms of consolidating, or expanding into the AC market and the overall non-dance oriented pop fields, I felt ANTR was just a better record than LaP which had some weaker tunes. But it was Madonna, and because of that she kind of took the gold.

Usually, when they release records around the same time, Cyn and Madge usually break even. Sometimes, Cyn can inch or blast ahead, she blasted with "Bring..." in '08 as you know.-Quentin