Just when we were beginning to wonder if Lady Gaga was ever going to return from her self-imposed exile, the reclusive 15-minute superstar is back to unleash The Fame Monster upon us. This add-on E.P clusters together 8 brand new tracks, of which some are outstanding: new age disco tunes in the musical biosphere of Nina Hagen, Madonna and Grace Jones.

First out the cage is the visciously irrational single Bad Romance, which begins with dark and humorous silent movie foreplay. But once underway, its claustraphobic attack is a fully immersing, full-throttle modern day Bohemian Rhapsody: the large and violent vitriol is fragmented into uncountable sections, each slashing different blades to weaken you under its immense weight, but is thankfully tamed with lashings of melodic respite.

The skull-crashing thud of the dancefloor-bouncing beats provokes Gaga's most insane face-screwing/ear-chewing wretched gargling yet: 'gaga oh wha wha wha' seems to be her rabies-mania put to good use, and such stimuli is dancefloor heroine.

She blubbers 'I don't wanna be friends' the way she ran across the VMA stage singing Paparazzi, only this time it's not annoying and pathetic - I think her distress would have been more humorous if she was wailing her romance-rejection as 'I don't wanna speak French'. Maybe that's just me. Her aural excretions are even more ridiculous, but the riot act textures are genuinely formidable - far too lividly theatrical to be properly sleazy, bringing this hot mess to the masses is no small achievement. 4:22's tossed off 'ugh' is beyond the fierce.

The UV-ray Ace of Base voltage of the shimmering mid-tempo march Alejandro is as close to blushing pop perfection as anyone is going to get - the washing-machine groove has to be heard to be believed. A clubcentric dub-reggae applies a playful gloss for the dancefloor dirge to settle down into a less meandering style, giving better definition to her symetrical lyrics, but the melody is no less unrelenting. The chilling heat and fluttering echo's rhyming 'Alejandro' with 'Fernando' conjures fervent Spanish eyes spying from behind slatted open-folded fans (although to me it flashes the image of being tag-teamed by two holiday reps in Ibiza, with Dannii filming it on her Nokia). The obvious La Isla Bonita comparisons are well earned, but it's elements are a pure replica of the Swede's Don't Turn Around - it's the kind of song I would love their original line-up to step out on the Eurovision stage with.

The oceanic electro diffuser Monster is another knockout with slushy synths and vocals like sucking the dregs with a straw. Gaga captures her disgust beautifully: 'I've never seen one like that before' is fabulously rude, and yes I apologise for using the word 'fabulous' - needs must I guess. The vivid and foreboding intro has regal strings to match the singer's appalled talky bits, with a jaded chorus gaining victory with subtle scorn, fizzing synths and wistful disco nostalgia.

On such good terms, Gaga completes her dancefloor-roaming dominance with the extravagant melancholy of the stark and poignantly unfeeling Dance In The Dark, which is bruised and numb with dripping synthesizers and self-destructive chorus, yet remains captivating and accessible. She might be recycling the verses from I Like It Rough, but the theme of abusive lovers in different contexts pensively shadow them together. Her daunting monologue references Princess Diana whilst sounding like a keyring Rikki Lake soundbite ordering 'you got that, gurrl?' Combining melancholic and sparse intensity with otherworldly 90s trance, the slick Starstruck Part II, So Happy I Could Die, is impeccable. Madonna deserves all the patronising z-snaps from rubbish gays in the world for Celebration after hearing this. The music is sensational - adrenaline seeps out into a dreamy club-fog moment of sheer heaven - I want to listen to this after 5 drinks on the dancelfoor, like, now! The eyebrow-arching lyrics are shamelessly trashy and magnificent, generating a substantial classic if ever there was one.

The glitzy stomper Telephone speed-dials Beyonce to engage in the first decent superstar diva duet since What Have I Done To Deserve This. Distracted and huried verses combust into a crying out chorus - Beyonce arrives in a right state, vibrating with rage and cellulite, she tries to fist her way in but this is Gaga's territory. They fail to play off each other, but nor does it descend into a catfight.

On the placebo track Speechless, Gaga still can't quite pull of being vulnerable - when singing an undisguised ballad she lacks the lyrical command to hit the nerve the way she does on her open-fire stompers. To temper such tracks as Bad Romance with a ballad such as this is good thinking, but it's still a stinker. Perhaps her lyrics of overstated alientation and style are more suited to dancefloor influences, but this does not cut it as she just sounds vaguely foolish with no glint of diverting glamour to rescue her. She needs to dare a little deeper than her make-up next time.

The easily rescinded concrete-scraping ersatz dirtiness of Teeth is anything but vunderful. Whereas the overdriven and abrasive approach works on Bad Romance, her vague sense of sleaze on this chintzy toilet-blocker is about as corruptive as using someone else's floss. 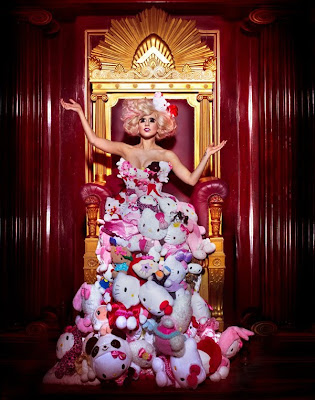 The Fame Monster is an epic monolith of bold finds: predatory dance beats, face-painted beauty, quirky lyrical gloss and one try-hard wannabe who no longer has to try hard to prove herself until her next album; Lady Gaga is no makeshift stale-sounding Madonna; flaring up her influences, she'll never fart in the same breath as Madge, but she actually is the new queen of pop for now. So deal with it, bitches. This album peaks so high it's not even worth bothering about her obvious faults, horrendous grasp of controversy and inability to pull off a conventional ballad, but Red One states her case more than her own brattish taste for come-down dissilusionment ever could.

Still to come in November:

Amazing! I Love all the tracks though. Maybe those 2 will grow on you?