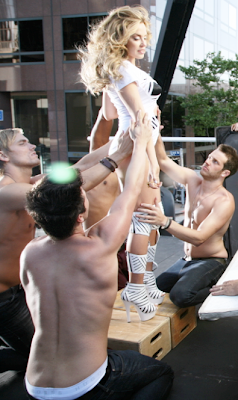 Not since Geri self-helplessly campaigned for germ-free chocolate cake bin raking with her classic anthem Bag It Up has an ageing gay icon made such epic use of gym-ready male torso's in a music video that looks like it might make Kelly Llorenna's This Time I Know It's For Real promo look like a Ingrid Bergman short film. Yes gays, girls and gays who just act like them, the first promotional stills for Kylie Minogue's new All The Lovers music video has leaked via twitter and probably countless other music blogs faster than a Glaswegian becoming addicted to heroine. Her addiction to all-inclusive equal-opportunity gangbangs has been rumored for years, and finally the 'lucky' singer has came clean with her goal of shagging every single organism on the planet. 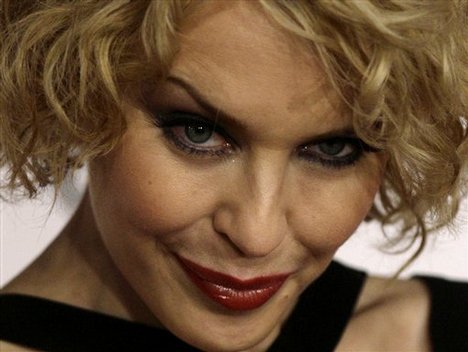 Gay guys might be immune, but trust me, Kylie's death stare, death-threats to Dannii and fridge-door forehead have been destroying hetrosexual men's lives, driving them to drugs, suicide, bad musical theatre productions and Angelina Jolie movies since the 80s and she's not about to stop now.
Posted by Diva Incarnate at 14:09

Email ThisBlogThis!Share to TwitterShare to FacebookShare to Pinterest
Labels: All The Lovers, Kylie Minogue

LOL Fabulous! Kylie shags the planet! She is such a classy Tranny!