You know who there are: the Spice Girls.
You know what the album is called: Spice. Global girlgroup 'girls-and-gays-R-us' landmark Wannabe is probably the defining pop song of the 90s: from Mel B's gregarious laughter setting it off, the Leeds-native big mouth blurts out the start of the alpha female rap dual between herself and the group's other loud gob Geri Halliwell, a call and response ensues whilst egging on some bloke to tell her what he 'really, really wants' as if the suggestion of sex isn't quite outrageous enough for them, before they then proceed to slag off their other band mates who don't really have a say in the matter. The best part is when Geri sneers Victoria is 'a real lad-eee' as if humiliating her for not being a slag or something. The Motiv8 'Vocal Slam' is neverending and set the standard for 2007's Soulseekerz remix, which was the best thing about their pathetically under-realised comeback.

The sexiness oozing from Say You'll Be There is like a more 'Essex' version of SWV's Right Here. Lubricated with a confident Rn'B saliva that was still effortlessly pop and without the self-awareness such genre-swallowing on Forever displayed, this was the moment if felt like they were on to something. 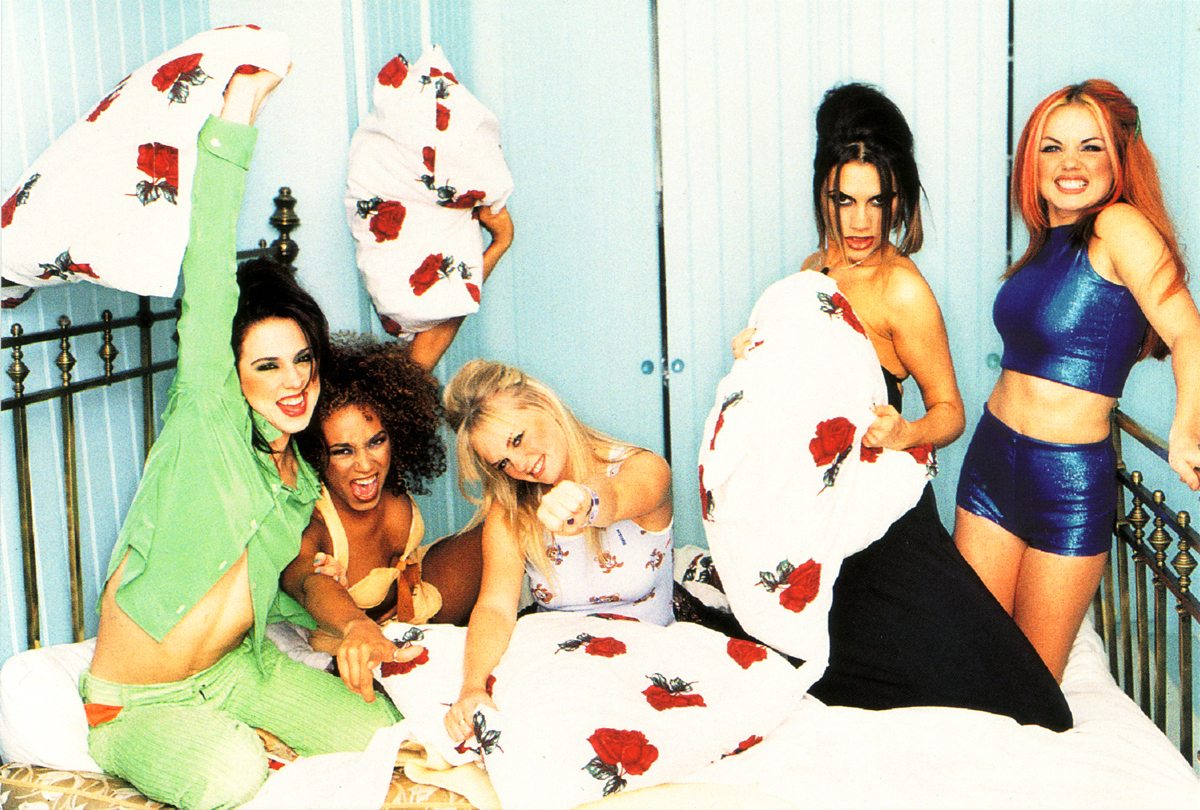 Safe sex teen-dream ballad 2 Become 1 put the condoms on big black dick and was coming 'back for more'. Layered, just like their favourite cocks, with gentle groans of encouragement. They do it in front of a full orchestra, the show offs.

Predicting (pregancy?) their fanbase might need to persuade their mummy's for extra pocket money to buy all their merchandise, Mama is ingratiating and despite signifying very litte, became one of the highlights on their comeback tour - having blagged a free bottle of wine at the O2 venue, I can barely remember anything to make that statement mean anything either. More playful mischief, Love Thing isn't notable until Geri and Mel get bored and start rapping. It's so imperfectly motivated. On the level of attention it deserves, Last Time Lover is basically a series of breathy swoops and probably should have stood down for either the Geri-mumbles of Bumper2Bumper or the darker Geri-drivel within Take Me Home. Not sharing their joke, Something Kinda Funny is the same, but better. If they appear to be dumb on the surface, then Naked proves underneathe they're a little bit more bumpy.

Album closer and tour opener If U Can't Dance's 'juice for you to saviour' just doesn't bear thinking about (Mel B's characature on the Bo Selecta show memorably blurts out declamatory statements about her 'pussy juice' which luridly comes to mind). Keeping safe distance, this remains one of their strongest suits, and Geri never sounded sexier.

Rampant disco slice Who Do You Think You Are was their very own Relight My Fire. Chorus like a tsunami of conditions for getting in their pants. Influenced acts from Billie Piper (the vanilla sexdrive pledge She Wants You) to Luscious Jackson (the confidence booster Nervous Breakthrough).

In reterospect: the best thing about pop music in the 90s.

Good write-up. I always felt this was a great showcase for their energy and personalities, and tied into what was happening in America in pop. "Last Time Lover" is actually perfection to me, rude and witty. Plus, these chicks rode the Digital Undeground sample loop composite (I detailed in my "Forever" retrospective), so they get massive kudos.

"Spice World" is their opus, it gave them creative voice and stretched them outside of the confines of their debut, but "Spice" is so damn charming. It's sexy without trying to hard, witty without being overbearing, well written, sung, and produced without wanting too much, or too little. In other terms, it is just right.-Quentin

Some of their music has dated, but is no less special than it was over ten years ago. I think of their song Move Over as a blueprint for Girls Aloud (in particular their song No Good Advice).

I wasn't a fan of Forever, but remember enjoying your review. Holler is nice weightless Rn'B and Oxygen is like a nice Janet Jackson ballad track 23 on an album bloated with all her interludes.

Their hearts weren't in it: they all thought they could have solo careers. Even when they came back in 2007 they were still pulling themselves in different directions (Mel C's album, Mel B on Dancing With The Stars, Emma painfully pursuing a TV career, etc). The album wasn't the disaster it was made out to be though. I'm always surprised Hollwe never got released as a single in America.