Tracey Thorn - Love & Its Opposite

Accidental MTV dance queen of the mid-90s Tracey Thorn joins the SWF brigade on Love & Its Opposite.
On Oh The Divorces, a precautious piano is married (see what I did there?) to Tracey's sweetfully gloomy disposition. She's a witty writer and her ruefully subdued mortification wins you over like an unassuming Victoria Wood number. Thorn sings in the 3rd person here, which gives her the sardonic objectivity of such lines as 'you were a charmer, I wish you bad karma', but then also 'the afternoon handovers by the swings' can't not feel personal. Long White Dress is destined for a rom-com soundtrack, remembering some of the innocense that got her where she is now. 'Like a ghost of something dead / long white dress' she isn't bitter, but disappointed.

Favouring a gentle folksy arrangement, you can almost imagine you're re-watching a wedding day D.V.D and doing the best you can not to eat ice cream. Contained as ever, Hormones is so upbeat and sumptuous you might not even notice she's still worrying about some crap stuff such as getting old. Like the wind blowing Dusty Springfield's Goin Back in your face, Kentish Town rekindles the quietude of Missing's all-alone-now misery. Why Does The Wind is the closest sigh to disco: its ambience is almost romatic. The soft drone of her voice helps her isolated observations to never drag you down, and You Are A Lover is a not-happy love song every bit as clever and realistic. Droll, seductive, and resolent tales of romantic caution link her to the at-my-age peacocking concerns of Singles Bar ('I pull off my ring as a push my way in ... can you guess my age in this light?' and 'I lay on my back for a hollywood wax' get back to the burden of making first impressions again). On songs like Come On Home To Me, her knowing disaffection earns her instant respect, and Late In The Afternoon is like a more chilling Sade. Best of all, the lush waves of Swimming lifts faith heavenwards with gorgeous glinting guitars and mirror-reflected backing vocals. Nothing is more bittwersweet than getting old, as on Child Star, yet Thorn is never not kind and caring. 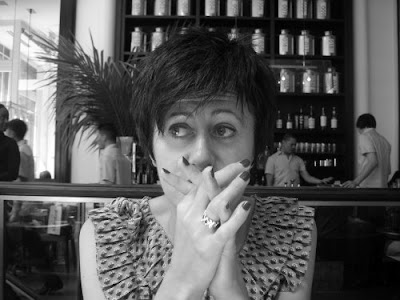 There are no excessive techono tempo textures for those who will 'oh yeah!' her when told Tracey is the one who stepped off that train. Instead, Love & Its Opposite is quiet and low rent pop that won't pull any punters off the street. Loungecore if you want it to be, it could not be more ordinary and yet I have never heard an album quite like it. Thorn's commonplace feelings of isolation are immersing and stained with enough wit and self-awareness to make sure you also think she's a nice person.
Posted by Diva Incarnate at 09:22

Email ThisBlogThis!Share to TwitterShare to FacebookShare to Pinterest
Labels: Love And Its Opposite, Tracey Thorn

interesting review - the album is too boring for me though but I like the Divorces and Kentish Town.