I Will Be Your Hetro Baby (Part 5) - Euphoria Review A survivor of the late 90s latin pop crossover invasion, heart throbber Enrique Iglesias is enjoying something of a revival with his 9th studio album Euphoria, and why not? Sadly missing are the slick Metro midtempo ballads, but I was never a metrosexual Hero-worshipper anyway, and so shimmery pop weighed down by a few Spanish dishes get the job done more than adequately.

The highly shaken fizz-plosion of the unhesitating I Like It's elevating synths usurp into exactly what I want from Enrique: something hard, fast and loud. RedOne shout his case just as loudly as Metro could. Listing Spanish words, I wonder if he's namedropping individual shout outs to No Mercy or the ketchup girls for all I know. Celebrating with irresponsible compassion, his childish yelps ought to be annoying but help bring the comedy along with his Whitney 'Oprah told me not to break' Houston style 'gurrl' pronounciation.

Over a jolly reggae synth-funk, One Day At A Time milks from the same teet as just about all of Akons pay-check snatching features, escapes the memory of Love To See You Cry's innocently sadistic grandeur, and based on Alejandro's US top 5 success this one might just manage top 20.

Getting serious(ly pseudo-tragic - two beautiful-losers, much?), downbeat gem Heartbeat could be his best ballad since Bassey-pining anthem Rhythm Divine. Understated and syncronised by Nicole's feminine treacle, both ugly and holding personal pain at bay with a gorgeously subtle tempo and piano layers that dissolve into moonlit melancholia. With breath-bottling vocals from both, they warble carefully with winning poise and balletic elegance (I wonder if the video will make use of Scherzinger's Dancing With The Stars success and Enrique's assumed groin authority - did I just say that?). The piano keys flow like a really heavy period, but without the cramp and water retention. Ladies, am I right?

Forging sexual chemistry with women is so hard for Enrique that he needs a really hot black guy to get Dirty Girl up and running. This exuberant anthem for 'greedy girls' melts into some lucky skanks cleavage, and who can blame her for letting them? If I were her I would already be pregnant and telling all to Wendy Williams, and sorting out an E! reality show. The big surprise is that it's not produced by DJ Encore. And onto the Spanish menu: No Me Digas is Escape style pomp; Ayer is as sensitively beautiful as you might fear; Cuando Me Enamoro is Travelodge reception Espanol; if Dile Que were on Kylie's Impossible Princess it would be heralded by fans as the next Imagine, but yes it's pretty unremarkable acoustic fodder; and the strumming Tú y Yo is at last worthy of his Enlgish-language singles. 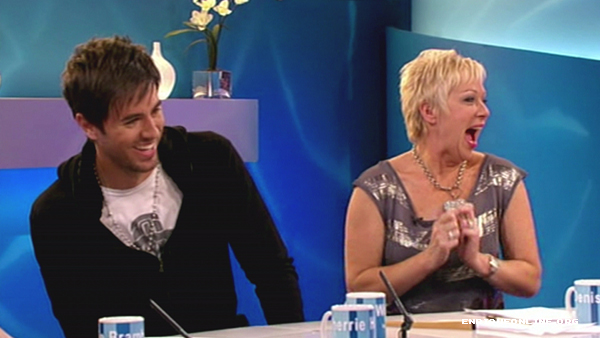 Verdict:
Euphoria is not really a billingual fusion at all - the songs are split and don't really meet anywhere in the middle other than the road if you get my drift. Much less songfully unstoppable than previous efforts Escape and 7, the spikes of energy as on I Like It, Everything's Gonna Be Alright (where he is as unforced as he'll ever get), or wounded fall from grace Heartbeat, which is more lyrical for an Enrique number than I could ever have dreamed, just might possibly reel him out of the c-list. And yet, slipping into latin slush he's simply content to a no-more-no-less approach.