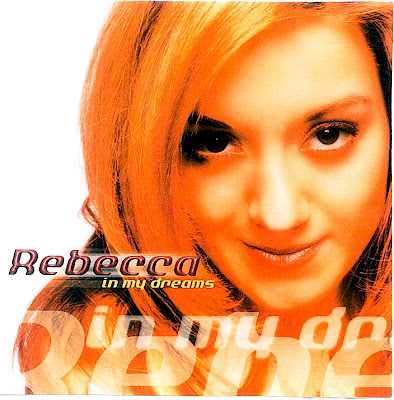 Welsh bubblegum scrummer Rebecca Eve Sutter ups her game on her one and only debut album that was so good only Singapore and Japan got to hear it. No singles were released and sadly no videos accompanied this landmark release. 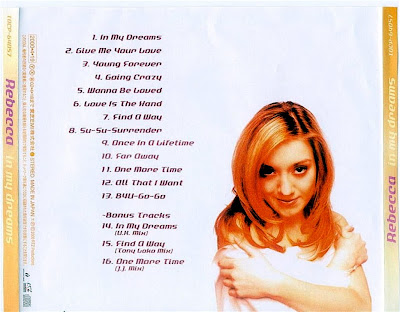 Title track In My Dreams treacles with beats so fast they give you hic-ups, establishing the uplifting momentum to be sustained throughout much of what else is on offer. Stodgy synths are what 2010 are crying out for even if no one was buying it back in 2000.

Below: In My Dreams.
Impatient rave-blaster Give Me Your Love craves a darker sensation that would make even the Real McCoy drool. Plummeting bassline deeper than her cleavage, sliced and diced with a razor sharp beat, synths are smeared with no hesitation for dignity and Rebecca 'wha-ooo's for an extra threat. The charts of 1995 would have been all the richer had this been released.

Feeling 'so real', Going Crazy commits to one too many cliches, but showcases her dizzying inferno well enough. Ballad with a beat, Wanna Be Loved is a lilting compromise between an Ace of Base outtake and a lesser Solid HarmoniE album track. The gorgeous-if-trying Love Is The Hand gets fingersome. Sounding galacial, tranquil and ethereal, Becky shows a surprising fertility for ballads.

Below: Give Me Your Love.
Giddy and rampant, Find A Way deposits a squidgy bassline, promoting a rapidity of dance that the tune itself can't actually keep up with, leaving it to sound like a prefab remix. The chorus is a bit too careful for my taste in hardcore eurodance.

Worthy of some faintly substantial praise, Su-Su-Surrender unleashes glossy electronic guitar strums in a very All Or Nothing fashion, and her plaintive plight might be rather passive to compete with dance divas such as Cher, but this is an elegant dance tempo for those still willing to drown in that whole late 90s style. 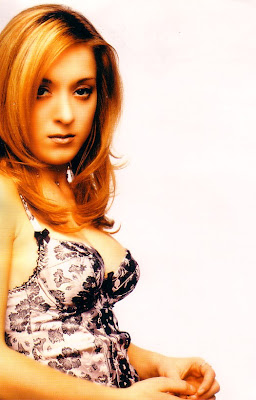 Imagine Gina G's heavenly intro to I Belong To You, with those synths spitting on your face like a mist. Now imagine a likeably inferior song called Once In A Lifetime that shares a very similar sensation. Rebecca needs very little encouragement, and when she finally lets rip 'oh yeah, oh yeah, yeah!' the moment just nails it for me. This is what I love dance music for - unthinking surrender to a manic hunger for pleasure.

With D. B. Boulivard-ish beat-start moment, Far Away sails into a dramatic tide of plaintively gutsy vocals, stoic piano sympathy sinking deep and a head-high disco beat is simply business as usual for this one. 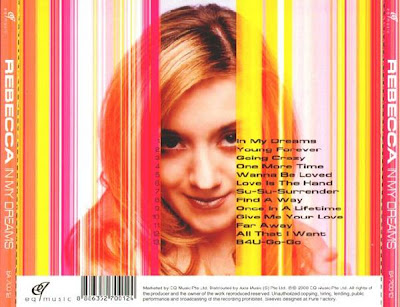 Bubblegum bynumbers, One More Time springs to life with a honking disco interjection, but this one really needs to get a grip and stop asking when and if from her guy. In fact, I think she's a lesbian in denial - who needs to be this desperate for action in this day and age? She's clearly looking for love on all the wrong websites. Stunning bubblegumpop-viagra arousal of All That I Want wacks you in the face with swanky assurance, with not buts or maybes. If only clubs were this knowingly tragic to play this kind of high class trash.

Below: Once In A Lifetime.
Finally growing some balls on B4U Go-Go, a song that Scooch, Deuce or even vintage Vanessa Amorosi would have been proud to drop out there. 'Reach the sky' lights herher fire and gets me higher, etc. A rash of fast piano keys that could rival Katie Price's stunning Italo-piano pelter Free To Love Again, she sure knows how to unleash an anthem out of nothing.

Below: In My Dreams (UK Mix)

My pants have just exploded - In My Dreams (UK Mix) is simply bubllegumdance heroine. Fizzy enough to make you burp, something just clicks more profoundly with this mix. The gut-wrenching soul search of 'put a little faith in me now' is the lyric to remember, you'll be too out of it to hear anything else. This is on the same scale as Alexia spiked with the faint whiff of Gina G. I need a lie down after this. And a pregnancy test.

Find Away (Tony Loco Mix) brings music back to the days of DJ Quicksilver and Sash! with speeding trance skidmarks creating staines that Rebecca's feeble vocal detergent tries in vain to wash out. In amongst the euphoria the singer forgets herself and even alows her voice to crow, and it's a stunning moment to be grateful for. Making Kylie jealous, Young Forever does not disappoint. Eyeball-bursting beats don't create much mess, but it's another highly lubricated dance-pop affair and the song she is most well known for.

Verdict:
Dizzy dance rascal Rebecca sadly missed out on her chance to expoloit the world's insatiable appetite for rampant Euro-dance flavoured bubblegum pop. The album peaks beyond description when she proves capable of eclipsing the cliches that determine the undeniable facelessness of it all. The quality never dips, and fans of the genre she marries herself to on almost every single track have hit the jackpot with this gem. Corkers include In My Dreams (UK Mix), Give Me Your Love and Once In A Lifetime.
7.5/10
Posted by Diva Incarnate at 01:35

Email ThisBlogThis!Share to TwitterShare to FacebookShare to Pinterest
Labels: In My Dreams, Rebecca

Hey Bitch, I happened to come across your review of my now ten year old album. I laughed my ass off and it really brought back some memories of a great time of my life. Great to see someone is still listening!

Lots of love and kisses and bubblegum dreams.

Oh it was a real treat to discover this album - those three last tracks I mention are absolutely stunning.

And thanks for not telling me where to go - all comments are meant to be irreverent simply to avoid hyperbole :-)

I'd love it if you would agree to a mini interview - just some questions about your career as a pop star and how that has continued in different forms over the years? It would be a massive shame not to hear more music - that UK remix of In My Arms is constantly in my head, it's like a fountain of pop hooks!