Kim Wilde - Catch As Catch Can

Glam new wave dance-pop designed for more than just dancing is the name of her game here. With cutely-competent no frills nasal tone vocals that even sound like sulky lip-syncing, soaking up gravity, she wants it all and gets plenty. And being plenty previous to pop perfection, Kim Wilde's murky masterstroke Catch As Catch Can is a whole speciese of music beyond the function of its genre. Borther Ricky provided the Hi-NRG gravy.

The gorgeous technicolour 1953 film Salome starring crimson Columbia studios movie goddess Rita Hayworth is one of my favourite movies of all time, so Kim Wilde having a not-quite-related-anyway song called House of Salome was always going to rape my ears at some point. With skin-crawling basslines and rippling shimmers it's a killer start off point for the album. 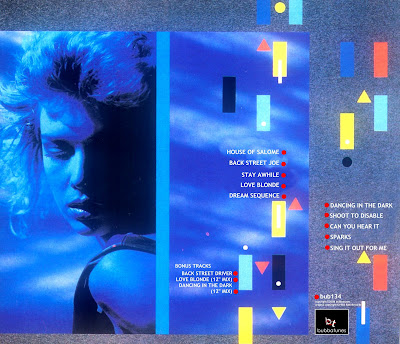 We used to want that sound
And everytime it played, we used to hang around
There was music and there was rhythm
And there was something I can't expain

The spellbound Stay A While is more theatrical still. Stargazing awe as if sighing into a gloomy sky. A Marc Almond style power-ballad chorus comes complete with the Soft Cell singer's trademark vocal crowing. Haunted by a fading lover or something.

Jazzy stomp Love Blonde is amusingly the shouty 2 Hearts of its day but don't let that put you off it's actually lots of fabricated fun.

With male walky-talky sounding soundbites Dream Sequence is almost like an apacalyptic/organ-ic companion to Kate Bush's Waking The Witch. 'That's right' may or may not be Kim's agreement. Unconcious, atmospheric, slightly disquietingly off-center music that is so dreamy it's almost physical as it is subliminal. The trance of murky machine-like mystery is amusingly woken up by Kim's cockney vernacular.

Hip-shaking Let's Hear It For The Boy meets Pointer Sisters vibeology of Dancing In The Dark is pretty alright as well. If it were a guy in club you would admire one particular body part in isolation and keep him in mind if nothing else caught your imagination, but the idea is that something will. Kim got to the point years later, resigning 'no, it wasn't really a good song'.

Missfire Shoot To Disable is the glum low point. It doesn't seem right to dwell on it, and it hardly rings false or anything.

The angelic mirror-gazing beauty of Can You Hear It is the sort of electro-princess pop song Kylie wishes she was capable of. Sorry to go there, but I did. Sincere feelings. Gentle and melodic. Exalting sensations that I think are called goose bumps. Yes, goose bumps sprinkled like caster sugar.

Screeching synth lines skidmark Sparks, pinging the album back to life. Ska-sax helps out the sheer spectacle and seeming avalanche of texture. Her fountain-pen voice certainly knows how to carry a tune, keeping you awake by chanting like lightning a la Ladyhawk's Delirium. I fear subconcious head-nodding just thinking about how exhilirating, rare, wild and pure her pop horizon-point aim truly is on this one.

Strung out strumming tinges Sing It Out For Love with cooing melancholia. Wilde sings with reassurance, into a breeze that is like a Love Will Tear Us Apart style swirl of synthesiezers.

Verdict:
Stunning blue-eyed electro. Kim Wilde managed cut-glass/sometimes-mushy vocals, attaching them to throbbing new-wave Hi-NRG pop and emoted the words over tracks blasted with blistering otherworldly glamour. Highlights include the shivery cool blue sheen of Can You Hear It, the dark and dominant sounds of the nightmarish Dream Sequence and rampant House of Salome, and the punchy fireworks of Sparks. The unhysterical perfection of it all, the sheer adaptibility of her ice-flat voice, and armed with that sweetly-patchy treacle of which sure knows how to concquer a bitchin' set of pop songs - these heavenwards surges of disco are tremendous ups and even the ballad is not a downer.

Email ThisBlogThis!Share to TwitterShare to FacebookShare to Pinterest
Labels: Catch As Catch Can, Kim Wilde

Hello, nice article for a great album, I have all the albums of Kim and we look for the end of August the new album, I'm a fan since the beginning, and I have a blog just for her, soon jpaul in France

Thanks JP.M I'll link your site, it looks good. I'm rather excited about the new album, Lights Down Low is hands down the best single of 2010.

A very interesting review of a very underestimated album (Number 90ish for one week in album charts, c'mon, what was wrong with you British people? LOL). For me the highlight is Sing It Out For Love (the sadness in Kim's voice is heartbreaking and the purity of melody is just divine) and I do like the dark and sinister mood of Shoot (do you know it was originally meant as a single?) Hey, and wasn't Rita great in Orson Welles Lady of Shanhai?

I'm really surprised it's underrated - I sampled some reviews and plucked out Can You Hear It to sample on youtube and didn't waste much time getting the album as it's gorgoeus.

It's my first Kim Wilde album since her greatest hits back in 1999, so other than that I know very little about her career. Stange about Shoot as it's the least memorable for me. I think Teases or Close will be my next to tackle but I can't wait to go through all her era's now!

Shanghai is a memorable picture - she does well in the part, but strange or not so strange that her soon to be ex husband didn't write her a better part to act more in (then again, it was re-edited and chopped up to the point where it doesn't make great sense, so maybe Rita had scenes that were even more unsympathetic perhaps for the 1940s audience).

Teases and Dares would be a natural next step. It is going to be re-released this month by Cherry Pop with some bonus stuff including one of the best ever songs Lovers On The Beach (criminally only a B-side to The Second Time single at the time). It would be a delight to read your next review :) (I didn't mention that before, but they are a feast to the eyes as well)

About Orson W films - they were mercilessly cut by the editors but thank God the "mirrors scene" was left - that was pure genius work...

I know, I'm not sure if that has added to his myth or if we truly were in for something unimaginable - the 'hall of mirrors' sequence had a lot cut from it and I think the added music probably gave it less impact during the gunshots firing into Elsa's image etc.

Thanks for the feedback - it's quite refreshing. Will start 'churning' out more Kim as I get it. I had a peak at the unrepresented 90s albums and know I'm in for a treat - I'm starting to idolise her!

What can I say - Kim released about 10 albums altogether, so there is a lot to discover, I guess. I've just ordered Teases... and Another Step remasters and I'm looking forward to hearing some rare tracks in good quality. With the new single and album coming out it's an exciting time for Wilders :)