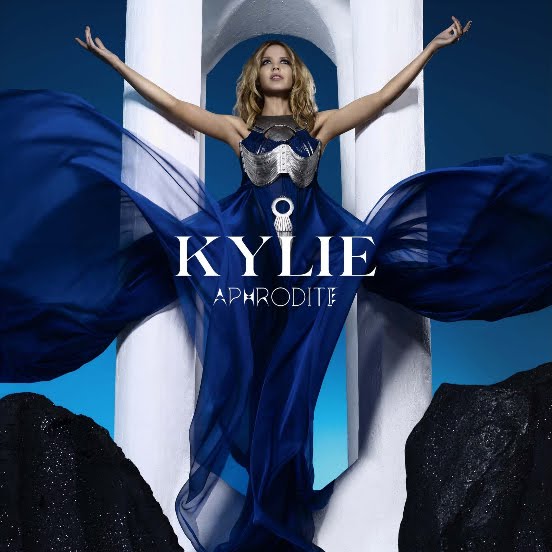 Collagen-clogged cougar queen Kylie hits her MOR Hi-HRT chaffing stride on her latest campaign to stop Dannii's imminent world domination, entitled Aphrodite, with imagery suggesting Rita Hayworth as the 'Godess of song and dance' in 1947s Down To Earth. Whilst the waxed n' botoxed-scrotum face is certainly a tryer, with a voice like pins-and-needles she promotes the sensation of wanting to thump your foot off the floor when you 'can't beat the feeling' of bad circulation. I almost don't know what to write about this piss poor album: with glossy production lubrication courtesy - mostly - of Stuart Price, it is like dipping mouldy toast into honey and expecting the intense sweetness to disguise the fungus it is smothering. But here goes, gays...

Above: BraveKylie can't quite pull off the classic DanniiRoadkill pose even if her creativity has at least been dead since 1991.
It's no surprise she chose to finally come clean about her addiction to gangbangs (with those nostrils she can fit more in than a 5 story car park), and her confessional orgy anthem All The Lovers ripples with warm currents and is an all over sensation of going into a choma, but my guess is that an ice pack would feel better. Maybe her youthful puffiness is down to all those facials, no wonder it is always so shiny and sore looking.

Above: Time for a facial, anyone?
Love At First Injection soundalike Guetta Outta My Way has that new-day/new-start freshness feel, or maybe she just really needs the toilet, who knows? In such blithe panic Kylie has the (swollen) cheek to bark 'I don't recognise the zombie you're turning into' - with one skin peel away from turning into an onion, I would say it must have been hard for her to have delivered that line with a straight face. Oh. A gutsy finish surely solidifies this song's pert position for single #2. Above: younger sister Dannii's eternal beauty has literally left Kylie hung out to dry.
The mild sweatless disco fizz of Put Your Hands Up froths up with even less calories than Coke Zero, and if 90s festival rumours are to be believed Kylie is never one for zero coke on cock. Actually that was Dannii, but nevermind. Dark orchestra shadows can't quite polish a turd, and I'd rather do a Dannii at Glastonbury than pretend I am a rubbish gay by insisting on enjoying this crap. Music for Bodypump classes, she can't even get her Olivia Newton-John on right.

Above: More clamy than a marathon runners you-know-what pouch, Kylie perfects her 'so damned bionic' strained wrinkle-free grimace.
The haunting Closer begins beautifully with some kind of blissfull damp-battery alarm sounds and a spiralling sense of botched plastic surgery realisation. Kylie is obviously alarmed as she hates for the camera to come any closer than 100 metres these days. Maybe it's about her biological clock, or perhaps it's her sat-nav as she drives to her local sperm bank or fertility hospital. Kylie is clearly still high on painkillers and yet to unwrap the bandages off her face if she wants to insist Everything Is Beautiful. The tragic pathos stretches the concept of Kylie being a good pop star even tighter than her right eyebrow. 'I hear what I want to hear' ain't even half of it.

Gold rush Hollaback Girl tribute Aphrodite is almost a euphoric revelation in such stagnant company, and with more bulge than her forehead the track oozes an atypical excitement for a whole minute and a half until it starts going nowhere new: 'I was gone and now I'm back' is her defining moment. Enjoying the high, she loosens her inhibitions and finally admits she likes watersports. 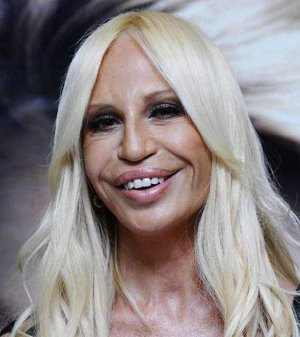 Above: A surgical-facade sheilds an increasingly distressed Donatella Versace who is said to have turned to drugs and even forced anorexia onto her own daughter in order to shock Kylie into ditching her beloved botox, and is close to breaking point according to Dannii Minogue who rolled her eyes and begged 7digital to allow international 'fans' to knab her visibly much older sister a number one more fixed than the It's No Secret singer's forehead.
The musky Light Years-esque backing vocals on Illusion spritz a subtle cocktail of self-awareness: sultry silliness, me lykie. The line-dancer esteem of Better Than Today is ironically the one you'd think Jake Shears helped co-write, but Kylie's relentless child prostitute vocals hardly pass for the bravado such honky tonk requires.

The septic-necessity of the lethally throbbing Too Much Skin (I Want Rid - Book Me In, Big Willy, Thanks Darling) jabs me sharper than a routine botox top-up and flares up wider than her nostrils.

Above: Just a lift away from enering the Grand National, Kylie's Impossible Princess anthem Say Neigh is a favourite of commedien Joan Rivers.
Try-hard electro-dribbler Cupid Boy shoots blanks. About as appealing as stepping bare foot on a used condom. The thick thunderstorm of uninspiring Luciana try-hardness isn't my cup of tea or even Kylie's syringe of organic community trade collagen, sounding like Lisa Scott-Lee having a never-or-now attempt at copying a Vetrtigo remix of Holly Vallance circa 2002.

Above: Do you 'nose' Kylie's favourite crisp? Crinkle-cut of course.
Dannii tribute Looking For An Angel is at least a bit 'more'. The sprouting strings give her some air to breathe - something that's hard to do when you can't move your face.

Above: Ever since Ally McBeal, expression-hungry Kylie hasn't looked back or been able to without spinning around.
Soaking up her influences like one of Kelly Llorenna's used tampons floating in a blocked toilet, the much hyped closer Can't Beat The Feeling amazingly features a writing credit from none other than Richard X. Fucking hell, she must have botoxed his eyeballs to get him to agree to it if this is the resulting poor man's Jentina version of a Daft Punk finale.

Below: A surgically-smug Madonna sent rival Kylie a boquet of needles to thank the Australian for making her look good for the first time since Bo Selecta.
Verdict:
A sad echo of past glories with faint traces of inspiration sweating from the gaping pores of only a few numbers. A Somalian's water bottle has more juice. She might look like Elton John face-painted his scrotum, but girl knows how to churn out mediocre trash and make it seem somehow decent in spite of her flaws.