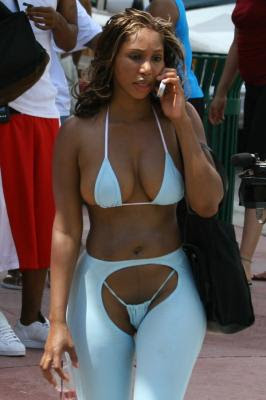 Be sure to check out my review of Toni Braxton's Pulse album here.

Something I have been waiting on for weeks is some solid information on Toni Braxton's sensationally desperate announcement on The Wendy Williams Show that she is filming a new reality series for the Bravo network called Braxton Family Values. Due in the 'fall', Toni is set to star alongside her sisters and former bandmates Traci, Trina, Towanda and most importantly Tamar. These girls have such racially-embiguous names, and I love them already. Sensing this is all going to be about Tamar, Toni was quick to try and spill the details first:

I don’t think people have any idea what they’re about to see. They have no idea. I’m Miss Congeniality. I'm a solo singer, that’s all I can say. My family’s very animated and it’ll be entertaining as they have all sang backing vocals for me so know what it is like to want to be famous. There will be some personal things about everyone. My mom and my sister Tamar will probably be the drama.

Tamar's rise to fame already started with a flop album a few years ago and was at it again on the Wendy Williams Show, flatly calling sister Toni 'hot mess dot com' - she probably wasn't aware the camera was on, but already it is painfully obvious she shall soon be having number one hits on the Billboard dance charts anyday now.

Below: patient Tamar confidently sits in the audience until 2 minutes in when the host eventually tires of pretending Toni is the bigger star and initiates some fingersnapping repartee with the Get None singer who can't help but call out her sisters desperation to cling on to her 90s fame.