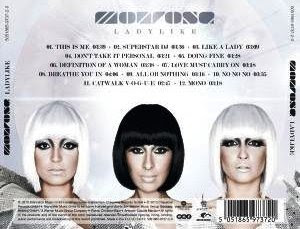 Distressed opener This Is Me is an arctic trance-disco ballad worthy of being a Dana International lead single. A snowstorm of pathos and flowing weaves they warn 'don't get twisted'.

Brushing themselves off with a bass that bulges out like Rosie O'Donnell's muffin top, Superstar DJ spurts it all out - messy vocals yelp with plaintive vitriol, verses are mumbled with foreboding distortion and the word 'jealous' is hissed at some point as well.

Jittery single Like A Lady posesses a mean throb with taut electro palpatations aided by the girls panting for demonstration. Straight-talking verses and a chorus that just wants good service. Gender ambiguity is the name of the game and whomever yelps to finish off the middle-8 steals the show. 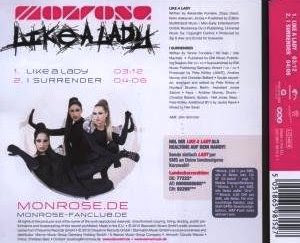 Weak-at-the-knees Don't Take It Personally mistakes itself for Dannii's Invitation - a literal invitation from Dannii to one of her infamous barbaric lesbian sling parties sadly isn't on the cards, but the sulky production flourishes are subtle, murky and gorgeously gloomy.

Pipes can't get as low as they want on clumsy verse 1, chorus is a total turtle-head - Definition of A Woman squeezes nothing out despite the palpable huffing and puffing. Dutch dance diva Elize would approve.

Acoustic ballads are never a good sign for girlbands unless the song is called Viva Forever and duty-bound ballad Love Must Carry On is initially no different. What a difference a cooing chorus can make, and a drumbeat salvages what it can come verse 2. The girls fight over authentic-sounding ad libs until finish.

Prefab crack anthem Breathe You In wheels in a grand piano - singing beautifully on an epic 90s-sounding ballad, it is a genuinely heartfelt number I would not have thought they were capable of. If they were popular in the UK I would have said a lot of teenagers were about to get pregnant. This has to be a single, it's so understated and yet gigantic sounding - they sound just as good as Solid HarmoniE on this one.

Soul-jaded ultimatum All Or Nothing seems to exude the languid vibe of Killing Me Softly (and the song too, etc). I initially got a bit bored on this one, but the cracks on the chorus vocal are kind of raspy and appealing for soundtracking iced-drinks in the sun flicking through trashy magazines.

The runway 'jam' Catwalk V-O-G-U-E challenges Christina's 'Glam' for a Heidi-Montag-off. It wins.